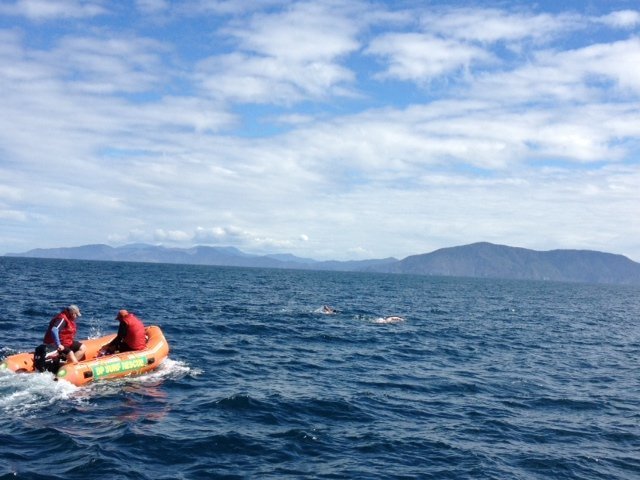 With his crossing of the Cook Strait last week, Darren Miller has accomplished six of the seven channels of the Oceans Seven challenge.

His 10 hour 42 minute crossing was done stroke for stroke – with a few loops thrown in for warmth – together with Craig Lenning who is also climbing the charts of the Oceans Seven with five channels etched on his Speedos.

Miller provides his first-hand descriptions of his swim Down Under between New Zealand’s North and South Islands:

1. After not training in cold water – or any open water for that matter – how was the Cook Strait?
Miller: New Zealand was one of the most beautiful countries I have visited. I have nothing but love for the friendly people who made our trip a memorable one. The countryside was breathtaking, the food was excellent and I highly recommend visiting at some point in your life.

I will always remember reading Lynne Cox’s first-hand account of her incredible journey across the Cook Strait and how difficult it was. I had expectations going into this swim that it would be tough; especially since few people have completed it and not much is written about it. When I travel, I focus 99% of my attention on the swim I have to complete. I am not worried about traveling around or doing anything other than completing the adventure I set out for myself. The swim comes first.

Having a full sponsor is something I never take for granted. I look at this blessing as something which could be taken away from me at any time. The motivation to never lose such a gift has set my focus on a ‘do-or-die’ approach to every swim I attempt. I understand luck and Mother Nature has a huge role in completing these swims; however I cannot control those factors so I can only focus on my physical and mental attitude.

I wanted to have an incredible crew around me for this swim, and it was an honor to have Shelley Taylor-Smith offer to come along. She, as well as having veteran Philip Rush, was a duo on the open water which is difficult to top. I knew Craig and I had the team to give us the increased motivation to complete this swim – it was an honor to be in their presence.

The swim itself was on a sunny, cool Thursday morning. We left the hotel at 6:30 am and were going to meet up with Philip down at Oriental Bay, however he was eager to get on the road so we actually met him at the same time coming out of our car park. We followed him in his Ford-150 (while hauling two rubber inflatable boats) to the Mana Cruising Club – about 20 minutes outside of Wellington. After off-loading the rafts, we pulled over and parked near the marina where our ‘boat to victory’, the 40-ft Tangaroa was docked. Captain Chris gave us the run down on his safety procedures, followed by Philip, and his swimming instructions. We left the dock, and took the 1.5-hour trip to the starting point on the North Island. The air temperature was about 15.9ºC (60.6ºF) with southwest winds blowing at 5-10 knots. We left at 9:42 am from the North Island, and started on our journey to the South Island. Water was incredibly clear, and cool – around 16ºC (60.8ºF). We could see straight down to the bottom. The sun was shining, and our swim was underway.

For the most part, our swim went along perfectly. The first feed went off at :45, and then every :30 afterwards. In addition to Gu products, Craig fed with Cytomax, Maxim, splash of apple juice and water. I feed with warm CarboPro and Cytomax, along with either Gu Roctane, or Cliff Bar Shot Bloks. I took children’s ibuprofen every 3-4 hours to help with alleviating any shoulder pain we might be feeling. The crew noted a seal at the start; otherwise all we saw was an occasional jellyfish.

Around half-way across we hit an upwelling of chillier water. It dropped down to about 15.5ºC (59.9ºF) and held that constantly until about two miles off-shore, where it went back up to about 16.4ºC (61.5ºF) for the remainder of the swim. We hit a tide which pushed us quite off course to the north, and made for a fitting ‘S curve’ which left many people asking questions from back home. Mother Nature decides where we swim. We were pushed pretty hard to the north, and had to continuously fight to make sure we were not pushed around the bend; otherwise we would have been in the water much longer. It was quite relentless and very annoying when you are trying to finish.

Craig and I became separated and I swam up ahead just as the sun was going down. Philip caught back up to me and I got a glow sticks and a blinker so I could actually be seen. He informed me to “swim as hard as you have ever swum before” into the finish, or we risked getting pushed around the tip. I swam as hard as I could the final hour or so, and was able to finally touch the rock wall to signify the completion.

It was estimated we swam upwards of 40 km (24.8 miles) for the crossing in total due to the currents pushing up and away. Apparently the faster way was south to north, however due to the conditions, we had to take the long approach. It was an incredible feeling to get this swim over with.


2. How much ocean swimming did you get in between the time you left how and the time you dove into the Cook Strait?
Miller: Acclimatization to cold water is the most important aspect I focus upon. The training for this swim was arguably the most difficult thus far, as all I had available to me was 26-29ºC (78-84ºF) swimming pools to train. Doing really long pool work-outs can get old very quick; it was tough mentally.

While Craig and I spent an average of about :30-1:30 each day of swimming, I took an additional :45-1:00 each day to simply float around. This approach is something I have done on every swim, and it has worked perfectly. Even though I would begin to shiver around :45 of not moving, I would continue to sit until about 1:30-2:00 each day. We would swim without caps, without ear plugs and a drag suit each day – once the day came, we would be ‘that much warmer’ once we began the swim.


3. The water temperature (62ºF) was not as cold as you feared. How did that make you feel?
Miller: The temperature in the Strait varied from 15.5-16.5ºC (59.9-61.7ºF) throughout the day, so at times it gave me a chill. The sun was out for the majority of the day, and it was nice to have the warmth on our back. We finished in the dark, so the air temperature (slightly warmer than the water temperature) did drop towards the end of our journey. I have always sprinted towards the end of my swims, as I want to get into the shoreline as soon as I can. My stroke rate remains constant (around 65 strokes per minute) for the majority of the swim, and increases (to around 70 SPMSPM) the closer I get toward the finish.

4. There are always cold spots in every channel. Did you hit any?
Miller: The water temperature dropped to the low point around half-way, and maintained that temperature until about 2-miles (3.2 km) off-shore. At this point, it warmed back up to the higher point. It was enough of a drop to cause a slight concern, and made me focus even more on doing what I could to stay warm. I have the confidence to know I can swim in this water, but the concern is always there.

5. How was it swimming with Craig?
Miller: Craig is one of the most widely respected cold water swimmers in the marathon swimming community. He is the only American who has been successful in the North Channel and has, for the most part, remained off the radar with his swimming. I have the utmost respect for him, as he is by far one of the toughest men I know. His beautiful wife, May, was, and has been with him every step of the way – I am proud to call them my friends.

He was not concerned with the water temperature, and actually swam without a cap for almost the entire swim. We did our best to stay together, however that is never easy in the open ocean. Since my need to stay warm was the focus, I took an approach to swim out-and-in (Philip referred to this as completing a circle away from the support craft) for most of the swim in order to keep warm. The additional distance was not an issue, and I knew I would have to do this in order to stay warm. We had spoken earlier in the week about swimming fast enough; as I knew Craig was concerned. He kept his pace strong and I simply did what I had to do in order to stay warm! It was an honor to Craig by my side every stroke of the way.


6. One more to go, arguably the hardest one in the North Channel. How are you going to prepare for that one? Are you going to do the longer, more proven route or are you going to attempt the riskier, shorter route?
Miller: I am very relieved to only have the North Channel left. I also know that this will be the toughest by far. Craig has been a fine mentor in regards to learning all about the North Channel and what I can come to expect. I want the Irish and Scottish swimming community to know this swim is being given my utmost respect, as I have learned a lot from Craig Lenning and Stephen Redmond. I will train to the best of my ability, and hope to have enough time to acclimate in Ireland before an attempt is made.

The training will be comparable to the Molokai Channel training, in that I will increase the weekly mileage to around 100K+/week for the final weeks leading up to the swim. I will continue to take cold showers, keep my home temperature cold and continue adding any weight I can. I do have sprint work built into my training as I know I will need as much speed as I can to move fast enough in the North Channel to stay warm. I am throwing around a few ideas to ‘think outside the box’ in regards to cold water training when the coldest water I can find would be a traditional pool at 26-29ºC (78-84ºF). I also hope to make trips to swim in the Colorado Mountains with Craig over the summer, as well as Jamie Patrick in San Francisco – both of these areas offer much colder water than I can swim back in Pittsburgh.

I am excited to continue my conversation with Brian Meharg and the Bangor Boat crew. I cannot say I have been one to focus too much on map charts, tide tables or weather – I like the ‘point-and-go’ approach to marathon swimming. These pilots know the conditions in the channels, and I rely on their judgment as to when an attempt should be made. Whichever is the traditional, proven path across the North Channel is the one I will attempt. I know 10-12ºC (50-53ºF) water is quite painful, but I will be ready for the challenge. My charitable mission has come quite a way, and I know what I am fighting for.