Date, Details Of The Longest Swim To Be Announced 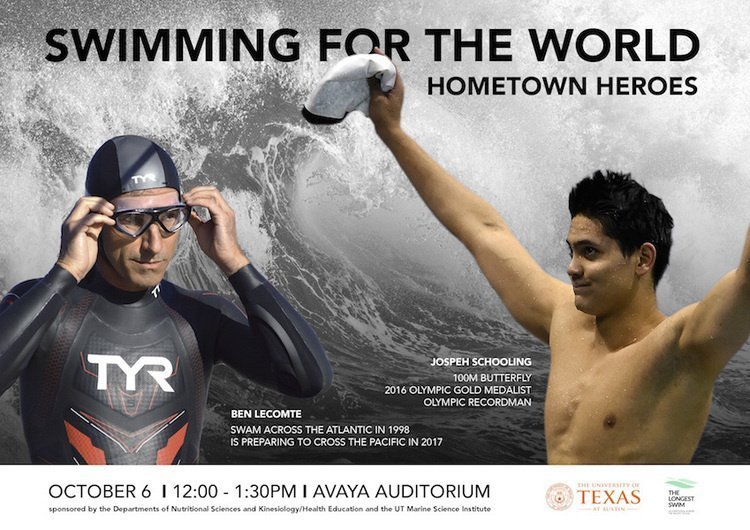 Both Ben’s were scheduled to start their transoceanic swim last year, but both Ben’s delayed their swims. Ben Hooper delayed his transatlantic solo stage swim between Senegal and Brazil until November 2016 (Swim The Big Blue) and Ben Lecomte has delayed his transpacific solo stage swim between Tokyo and San Francisco until sometime in 2017 (The Longest Swim).

Lecomte will announce the date and details of his swim together with Olympic 100m butterfly champion Joseph Schooling on October 6th at the University of Texas in an event called Swimming for the World: Ben Lecomte and Joseph Schooling.

Both Lecomte and Schooling will talk about the nutritional energetics of swimming between 12:00 to 1:30 pm at the Peter O’Donnell Jr. Building Avaya Auditorium in the University of Texas at Austin.

Paul Lecomte, Project Manager of The Longest Swim, announced, “Ben was the first man to swim across the Atlantic Ocean in 1998. He is now ready for his next challenge; The Longest Swim from Tokyo to San Francisco — an expedition across the Pacific Ocean in the name of science and sustainability.

Alongside renowned institutions like NASA and Woods Hole Oceanographic Institution, several scientists from the University of Texas will take part in this journey, conducting oceanic and medical research during the swim.

Joseph Schooling was the only man to swim faster than Michael Phelps in the 2016 Rio Olympic Games. He is now the Olympic record holder for the 100-meter butterfly, and the first Olympic gold medalist in Singapore’s history. Joseph is a student at UT, a member of its swim team, and a patron of The Longest Swim.

After years of preparations, Ben will take the stage with Joseph to announce the projected launch date of The Longest Swim

Facebook Live will bring the October 6th event to a global audience here.