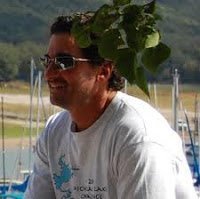 There were rumors that 45-year-old Dave Barra was training hard – really hard – during the cold winter months in New York’s Mid Hudson Valley. Besides the hours in the pool, he was also reportedly getting acclimated to sub-10°C (50°F) water at nearby lakes and focused on coordinating his travel plans and logistics.

And those plans and hours and hours of training and planning paid off. His accomplishments this year have been nothing short of remarkable.

His season started off in the warm, tropical waters of the Maui Channel between the islands of Lanai and Maui on March 21st when he completed the 9.6-mile (15.4K) channel in 4 hours and 55 minutes.

He then followed that up with a 24-mile (38.6K) second-place finish at the Tampa Bay Marathon Swim in Florida on April 17th where he finished in 10 hours and 49 minutes.

After a rest of 8 weeks on June 12th, Dave continued to hammer away by swimming 28.5 miles (45.8K) in the Manhattan Island Marathon Swim in New York where he finished 15th in 8 hours and 30 minutes – the first leg of his Triple Crown of Open Water Swimming.

Then the 21-mile (33.7K) Catalina Channel in California was next on July 20th with a 15 hour and 37 minute swim in tough conditions – on his second leg of his Triple Crown.

But Dave is not ready to rest on his laurels: he has at least one more marathon swim under his belt this year, the 17.5-mile (28.1K) Ederle Swim from New York to New Jersey.

Not since the heyday of International Marathon Swimming Hall of Famers Michael Read and Kevin Murphy has the marathon swimming world been graced by a working man and amateur swimmer so prolific and successful as Dave Barra (129.6 miles or 208K total in one season).

Humble, passionate and committed, Dave represents the good and the positive of the sport.