Dave Simcox At The Core Of Huntington Beach Junior Guards 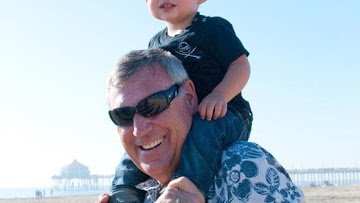 For nearly 50 years along the coastline in Southern California, the voice and authority of Dave Simcox has commanded attention and respect from the beach-goers, swimmers and surfers.

Under his command for nearly 4 decades, Simcox coordinated the Huntington Beach Junior Guard Program that has become a role model of ocean safety and awareness on the West Coast.

And for nearly 50 years, the venerable Huntington Beach lifeguard has protected and guided generations of beach-goers and budding lifeguards. “He has affected thousands and thousands of kids and parents,” said Michelle West, a parent of two teenagers in the Junior Lifeguard program.

“We are, I feel, one of the very last strongholds of good manners,” said Simcox, a throw-back to old-school etiquette in a social media world. “We’re semi-militaristic. We rip on the kids for not putting their trash in the trash can. We rip on the kids for cursing. We punish in push-ups. And you know what? The kids love it because we treat them all the same.”

He was one of the first ten lifeguards hired in Huntington Beach, known as Surf City U.S.A., in 1964. Since then, he has had a non-stop positive impact on the local community and its beach-oriented lifestyle. Then in 1973, the city started its Junior Guard program with Simcox playing a key role as he continued to serve as a full-time teacher, swimming and water polo coach at a local high school.

“[Huntington Beach] is a magic place,” recalls Simcox who will be sorely missed in his retirement.