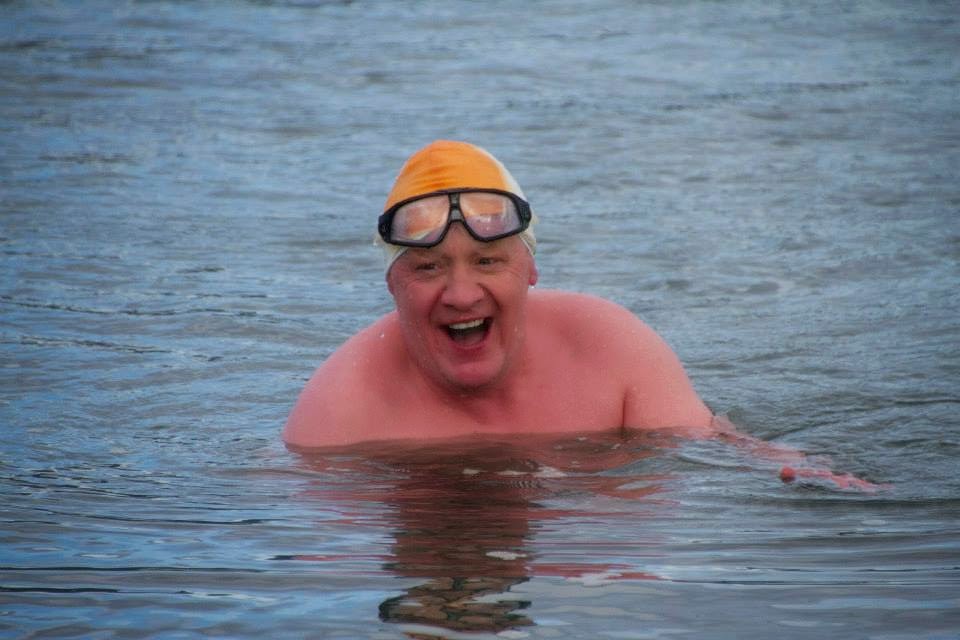 David Burke from Newry Co Down Ireland is a man with a mission and doing so without his left leg above the knee.

His aim this year together with five other able-bodied swimmers (including Julia Craven, Alison Caldwell, Barry Duffy, Barry Patterson, and John Mc Ilroy) is to cross the North Channel in late July under the direction of Pádraig Mallon. “Pádraig is coaching us and pushing us along. The cold is my biggest mental challenge, not the swim distance,” says Burke not unsurprisingly for those who attempt the swim between Scotland and Ireland.

But Mallon, a renowned ice swimmer, is helping Burke acclimate. “We had our passport swim for the North Channel and swam 7 km in Carlingford Lough yesterday in 11.9ºC (53.4ºF) water. I felt lot stronger than I imagined. We had 7 on team doing it. I was in for 2 hours 11 minutes which was 25 minutes from the suggested finish, but Pádraig decided that I had nothing more to prove so called me in and just smiled at me. It was a lovely gesture from a truly great lad. Mentally I came good and my stump was fine. Us amputees have a lot to worry about as a nice grey seal swam with us for a bit.”

Burke lost his leg in 1972 at the age of 7 as a result of a car crash at a stock car race that he was watching. He took up swimming ten years later and realized that he loved swimming 400m and could do without the sprints. “I started training more and got asked to play water polo for Newry.” Water polo led to other things including his first open water swim in Camlough Lake in the mid-1980’s. “I did a few 1-mile sea swims and swam until early 1990’s.”

But then he stopped for two decades and only recently got back into open water swimming. Burke explains why. “I started to miss it when I saw the growth of open water swimming. I was looking at the times they were doing and thought, ‘I can do that.’ After a few false starts, my partner Martina gave me a membership at a private pool and the bug hit. After a year of pool training, I took my first hop into Camlough Lake and swam 2.7 km in 43 minutes.

After the Camlough Lake Water Festival, Pádraig got me to accept a challenge and up came the idea of a North Channel relay. So far, so good. I am training hard and am getting my head around cold water which was so so hard. But the sea swim yesterday showed me that I can do it. I swim because I love it. My driving force is Pádraig and Martina; I can’t praise then enough
.”