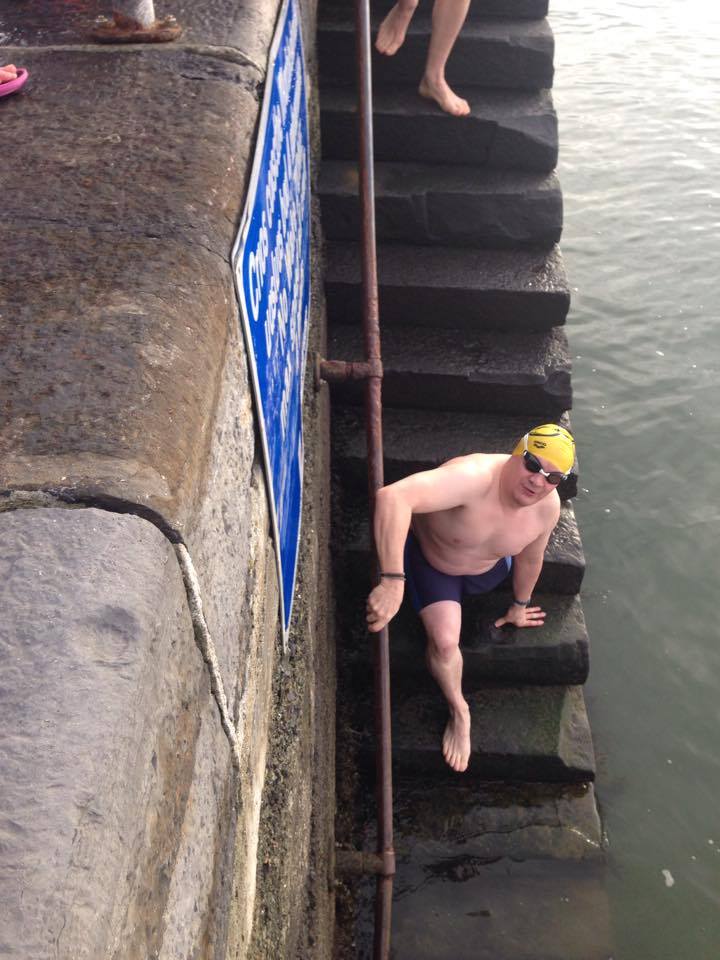 David Burke is an open water swimmer from Ireland and member of the Camlough Lake Water Festival and Newry Triathlon Club.

Burke faced trauma early in life at the age of 7 when he had his leg leg amputated as a result of a car accident in 1972.

He also endured two femur fractures on his right leg that was nearly severed at the knee.

It was a tough start for a young child.

After his injury, he took up swimming at a local pool and at 17, he took part in a 1 km swim. Two year later, he was able to drop his time from 23 minutes to 11 minutes to represent Ireland in the Paralympics.

“Six years ago I started noticing the rise of open water swimming and after doing witness at the Camlough Lake world record swim, the bug started to bite,” he recalls, talking about swimmers with disabilities and the possibility of assisted swims in the future.

“My partner Martina Mc Garvey gave me a Christmas present membership to a local pool and gym. One year later I took part in the Lord and Lady of the Lake 2.7 km swim in Camlough Lake as well as a few swims in relays as part of triathlons.

Two years ago after a 5 km swim, my good mate Padraig Mallon made me sign a piece of paper without me seeing what was written. It was witnessed and I opened it and read ‘North Channel relay 2014’.

On July 5th 2015, my teammates in Team Eleven Feet Alison Caldwell, John Mc Elroy Jacqueline Mc Clelland, Barry Patterson and Adrian Poucher crossed the channel in 12 hour 52 mins. I entered the records books as the first amputee to swim the North Channel in any form. The year also involved various lakes and sea solo swims ranging from 2 km to 8 km in length
.”

These are remarkable achievements for anyone, but especially so for an amputee.

“Open water swimming is tough at the best of times, but I was faced with a few extra problems. The first one being was the cold in my stump. This was due to less blood flow. I was worried that this would be damaged. Various discussions were had with doctors and where I get my limbs made. A friend Neil McDonald, an anaesthetic, suggested a pathway blocking cream that numbs nerves to stop the feeling being transmitted to my central nervous system.

This worked, but as I was going by the rules of the [North] channel, I found the more skin swimming I done, the less I used [the cream]. A month before I swam, I stopped using it.

Another problem was exiting from the water. This was solved by two strong people on the boat hoisting me out under the arms. It was not pretty but effective. The other problem was in training entry to various swim starts because of algae. These can be slippy, but crutches and not being afraid to ask for help and at times sitting down and edging into water is a cure to many problems.

I understand that people with disabilities have to be given equal chances to show that they can compete with other able-bodied people. I ask for no favour in training and indeed I get none especially from the crew around Camlough and Oliver Harkin in Newry Triathlon club who I swear delights in pushing me hard. I find that at this level people with disabilities think like myself, but this should never be used to exclude others who don’t share my views and indeed might be only coming to terms with their disabilities.

If assisted swims for people with disabilities help them achieve their goals, then opportunities should be facilitated in order for them to achieve their dreams in whatever distance they chose to swim.

So to 2015 this year I was a rescue swimmer for the ice swimming event held by the Camlough Lake Water Festival and canoed for the swimmers in training. But in August this year I aim to have another go at a North Channel Relay with the Team Infinity Five Gillian Mc Shane, Noel Grimes, Joe Belton, and Thomas O Hagan. We have already passed our passport swim – 2 hours in water under 12ºC.

If I can help or encourage other people with disabilities to swim, then my small journey helped so much by so many great people will be worth it. It is my way of saying to Martina thank you for been at my side when training. The long hours got to me and to her as well so thanks Martina without you nothing would be possible