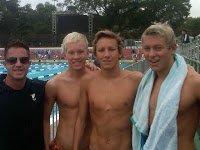 David Heron, a high school junior from Mission Viejo (shown in the middle of his teammates including Janardan Burns on right), pulled off a dramatic victory in the USA Swimming National Open Water Swimming Championship 5 km race.

Heron played his cards right as he stuck in the lead pack throughout the race until he swam up the sides of teammate Burns, North Carolina’s Dan O’Connor and Southern California rival Jordan Wilimovsky of Team Santa Monica.

Drafting like a veteran waterman throughout the race, Heron then picked up his kick with 500 meters to go and shot off like a rocket, doing his version of The Ilchenko.

“He looked like he was swimming a 50 towards the end of his race,” commented race announcer Mike Lewis on Heron’s tremendously strong kick that propelled him to a 57:59.2 victory. The top 5 men included the next generation of top American open water swimmers, making their names known now:

The full results are here.