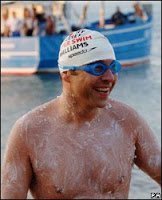 Colin Hill of the Great Swim Series in an upcoming interview on Open Water Wednesday described the Perfect Storm that has led to an upswelling of interest and participation in open water swimming in Great Britain.

With [Keri-Anne, Cassie and David gearing up for the 2012 London Olympics 10K marathon swim, Kate Rew’s Outdoor Swimming Society‘s explosive growth, the Perfect Storm is being stirred up again with David’s planned 200-mile swim along the length of the River Thames from its source in the Cotswolds on behalf of Sport Relief.

A solo swim along the River Thames was first conquered by pioneer Lewis Pugh in 2006 on a 21-day journey (stage swim). Both men faced the swim with a run since the first part of the river is non-swimmable. David points out, “You’ve got to walk the first (part) or run or jog – that’s probably what I’ll do, I’ll jog. I’ll jog when the cameras are on me and when they’re off me I’ll start walking.”

Walking, running or swimming, whatever is done, the joyful, challenging interaction with nature is creating a Perfect Storm for the sport. Kate Rew explains its best: