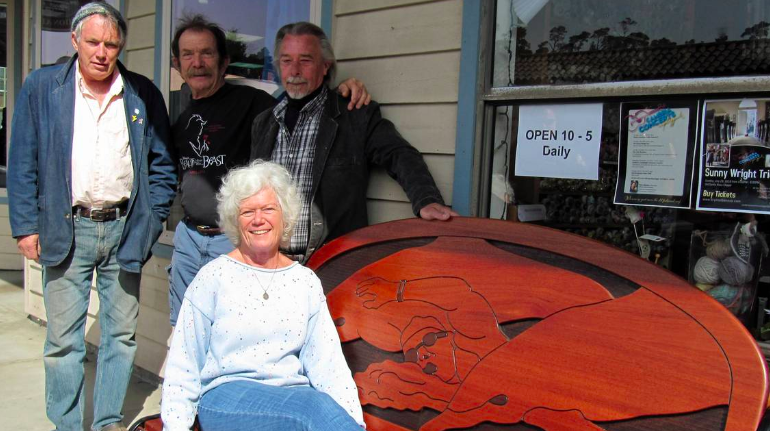 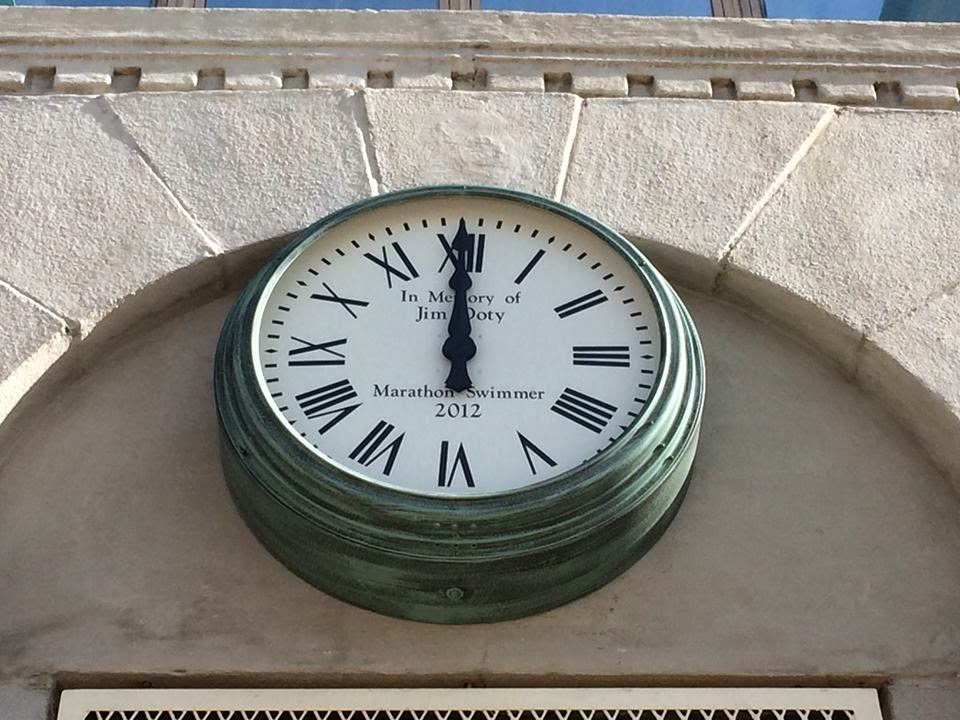 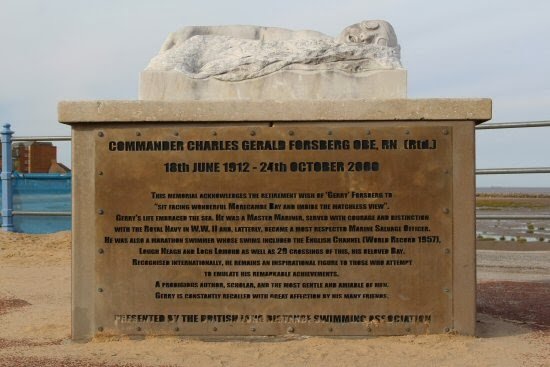 Open water swimmers who have inspired many over the last 140 years. There are dozens of landmarks and memorials named in their honor.

There are also hundreds of memorial events that are held in pools, bays, lakes and seas around the world, many more than are listed below.

A representative sampling of these memorials around the globe include:

1. Ben Carlson Memorial Lifeguard Headquarters and 3-meter bronze statue at the Balboa Pier, Newport Beach, California. Named after the 32-year-old Newport Beach lifeguard, surfer and swimmer who gave his life in trying to rescue others. He passed away in 2014 when a huge set closed out on him during a rescue. Additionally, a scholarship has been created to raise funds for student lifeguards and to support organizations that aid underprivileged children.

2. Diana Nyad Plaque in Smathers Beach, Florida: Named after the 64-year-old who swam from Cuba to Florida. The plaque reads, “Diana Nyad came ashore at this point on Smathers Beach on September 2, 2013, having swum 110.86 miles nonstop from Havana to Key West, the first to achieve this epic crossing without a shark cage. Successful on her fifth try (51 hours, 54 minutes), Diana first attempted this feat in 1978. Thousands on this spot and millions worldwide took inspiration from the 64-year-old’s first words upon realizing her lifelong dream: “Never, Ever, Give Up.”

3. Two Jim Doty Memorial Clocks [see above] are posted at the clock tower at the L Street Bathhouse (Curley Community Center) in South Boston, Massachusetts. Named after International Marathon Swimming Hall of Fame Honour Swimmer James Doty the clocks aim to help swimmers training in the harbor know how long they have been swimming.

4. Vicki Keith Point is an area at the end of the Leslie Street Spit on Lake Ontario in Toronto, Canada that was named in honor of Vicki Keith. This is place where she made most of her landings after crossing Lake Ontario.

5. The Cliff Lumsdon Park is a park in Toronto, Canada named in honor of Cliff Lumsdon, a famed professional marathon swimmer from Canada.

6. McConica Cove is a small cove on Catalina Island named on 11 August 1989 in honor of Jim McConica, a famed American pool and open water swimmer, who participated in a record-setting relay across the Catalina Channel.

7. Webb Crescent is a road in Dawley named in honor of Captain Matthew Webb, the first person to successfully swim across the English Channel.

8. The Captain Webb Primary School is a primary school, nursery and day care center located on Webb Crescent in Dawley, Telford, Shropshire, England that was named after Captain Matthew Webb.

9. Captain Matthew Webb has a memorial in Dawley, England with an inscription “Nothing great is easy” placed in honor of his 1875 crossing of the English Channel.

10. The Webb House is the youngest of the houses at Adams’ Grammar School in England that was named after Captain Matthew Webb.

11. Cape Lynne Cox is a cape on Siberia’s famed Lake Baikal located near the Angara River where Lynne Cox became the first person to swim 7 miles from cape to cape in 4 hours 19 minutes in August 1988.

12. There is a federal plaque erected by the Canadian Historic Sites and Monuments Board near the site of Marilyn Bell‘s finish on her 1954 crossing of Lake Ontario in Canada.

13. A plaque is mounted on the base of a statue of a lion along Lake Shore Boulevard by the Government of Ontario Building of the Canadian National Exhibition commemorating Marilyn Bell‘s Lake Ontario crossing in 1954.

15. The Marilyn Bell 1 is a ferry boat that serves the Billy Bishop Toronto Island Airport and named after Marilyn Bell. The name was chosen as the top name in a contest held by the Toronto Port Authority.

16. The Bert Thomas Monument is a rock structure and plaque on Ediz Hook in Port Los Angeles, Washington that commemorate the site where Bert Thomas entered the Strait of Juan de Fuca on the first successful crossing on July 8th 1955.

17. A statute of Jacques Amyot is located near the finish of the Traversée internationale du lac St-Jean in Roberval, Quebec, Canada on lac St-Jean to commemorate the first person to cross lac St-Jean.

18. In 1946, the inaugural Keo Nakama Invitational was held in the salt water of the War Memorial Natatorium near Diamond Head Volcano on Oahu, the longest-running annual pool swimming meet in the United States named for Keo Nakama, the first person to cross the Molokai Channel.

20. Byron’s Stone near Tepelene, Albania is a memorial to Lord Byron, an Honour Swimmer in the International Marathon Swimming Hall of Fame.

21. Byron’s Cave or La Grotta di Byron in Portovenere, Italy is another commemoration to Lord Byron.

22. The Statue of Lord Byron in Athens, Greece is another memorial to Lord Byron.

23. The Lord Byron Memorial Stone in Westminster Abbey is a memorial to Lord Byron in the Poets’ Corner / South Transept.

25. The Doc Counsilman Memorial Lecture Series is an annual lecture given by luminaries outside the swimming community at the American Swimming Coaches Association’s annual World Clinic and was named after James ‘Doc’ Counsilman.

26. Buddy’s Buoy has been a fixture in the Pacific Ocean for over 40 years and is a marine buoy located off of the Newport Pier in Newport Beach, California located in front of the Newport Lifeguard Headquarters and named for famed California waterman Buddy Belshe.

27. Dowling College was named after Robert Dowling, the first person to swim around Manhattan Island. Dowling provided a grant of $3 million in 1968, which allowed the Adelphi University campus in Oakdale, New York to become Dowling College.

29. A bust of Gertrude Ederle, the famed American English Channel swimmer, was planned for the Sirene Hotel in Cap Gris Nez, France.

30. The Memorial to Commander Charles Gerald Forsberg [see above] is a monument in Morecambe, England to Commander Gerald Forsberg, an inductee in the International Marathon Swimming Hall of Fame and renowned marathon swimming author and administrator.

31. Annette Kellerman’s plaque and collection transferred from the Dennis Wolanski Library and Archive of Performing Arts at the Sydney Opera House to the Powerhouse Museum in commemoration to Annette Kellerman, an Honour Swimmer in the International Marathon Swimming Hall of Fame.

32. Des Renford Aquatic Centre is an award-winning facility located in Heffron Park, Maroubra, Australia that is named after the former King of the Channel®, Des Renford.

33. Murray Rose’s Malabar Magic Ocean Swim is a charity swim organised by the Rainbow Club Australia. The 1 km and 2.4 km ocean swim is held in February in Sydney, Australia and is named for Olympic swimming legend Murray Rose. 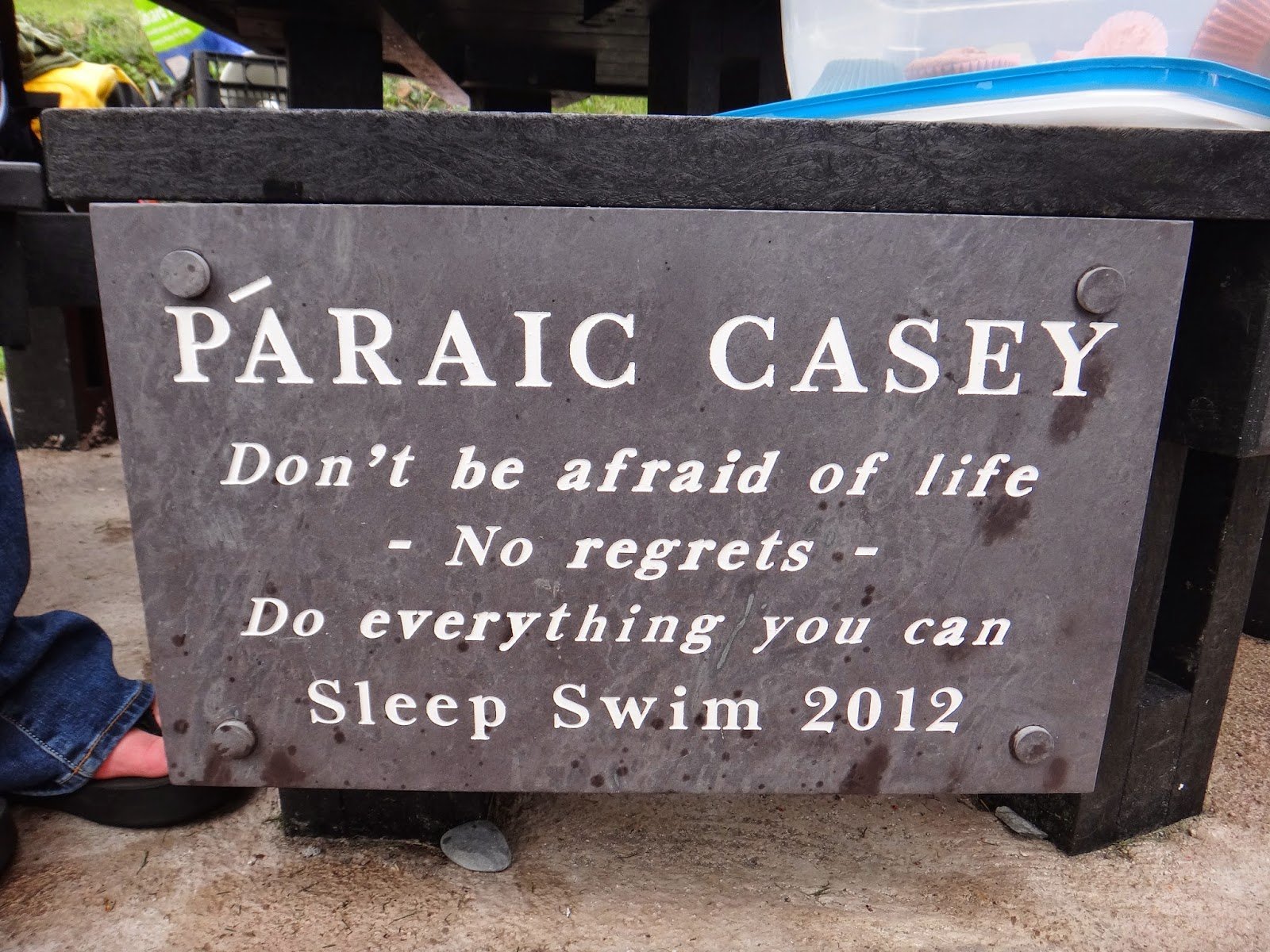 34. Páraic Casey Memorial at Sandycove Island is a memorial plaque in honor of Páraic Casey, a 45-year-old open water swimmer from Co Cork, Ireland who passed away half a mile off the coast of France in July 2012after swimming for more than 16 hours in the English Channel.

35. The Chase Challenge, named after New Jersey waterman and marathon swimmer Bruckner Chase is an ocean swimming competition at the Monterey Beach SportsFest. The SportsFest includes 0.5-mile, 1-mile and 2.5-mile ocean swims. Any experienced swimmer that takes part in all three swim distances is eligible for to win the Chase Challenge award. 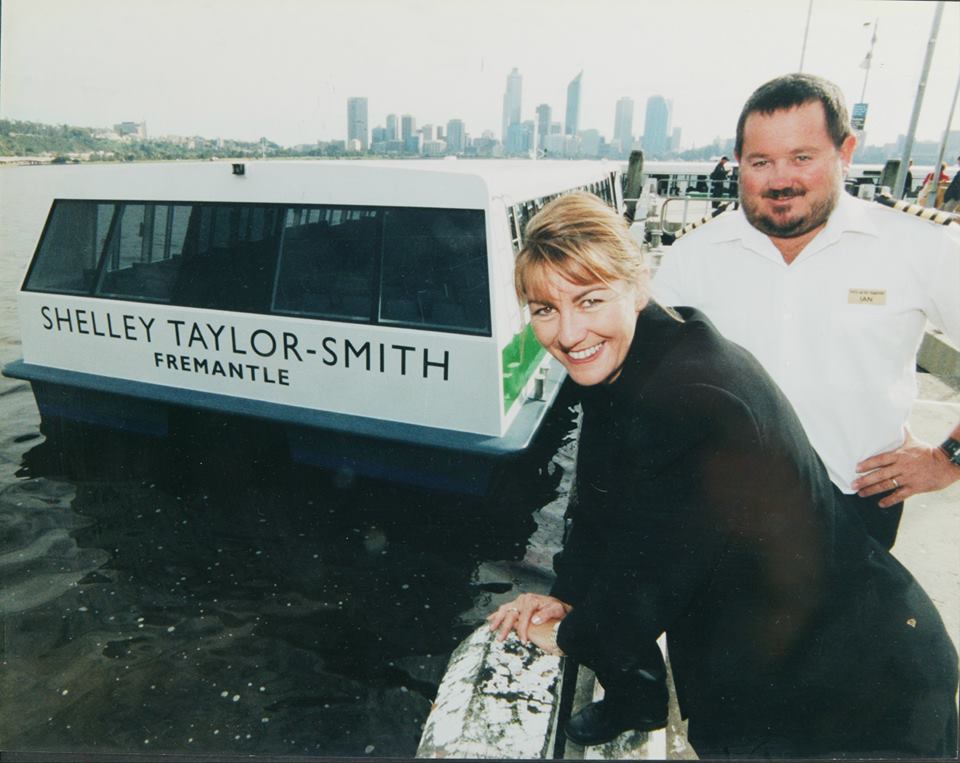 37. Rue Lacoursière is a street named after Régent Lacoursière, an Honour Swimmer in the International Marathon Swimming Hall of Fame.

39. The Crippen Cup 10K Marathon Invitational and Fran Crippen TYR Swim Meet of Champions in California are annual open water and pool swimming events that draw athletes from around the world. 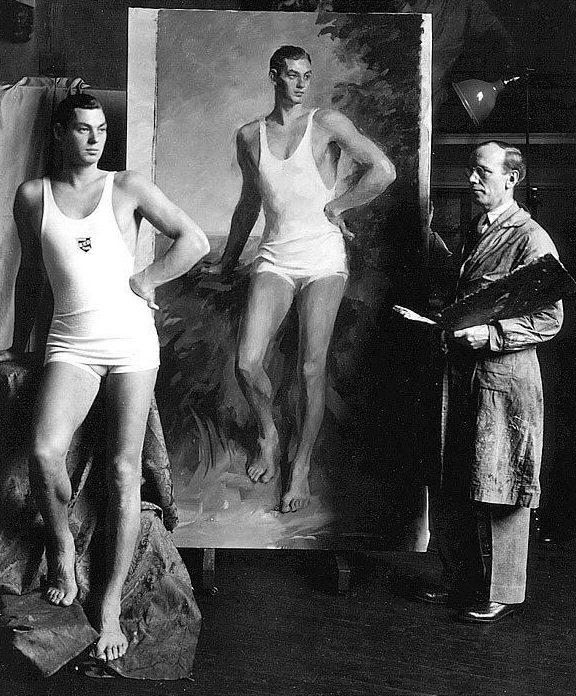 40. Johnny Weissmuller portrait by the Pach Brothers at the National Portrait Gallery in the Smithsonian Institution (circa 1924).

42. Hollywood Walk of Fame five-pointed terrazzo and brass star of Johnny Weissmuller on the north side of the 6500 block of Hollywood Boulevard.

43. Hollywood Walk of Fame five-pointed terrazzo and brass star of Buster Crabbe on the north side of the 6900 block of Hollywood Boulevard.

44. Hollywood Walk of Fame five-pointed terrazzo and brass star of Esther Williams on the east side of the 1500 block of Vine Street.

48. A statute of 2008 Olympic gold medalist Maarten van der Weijden will be erected in the Frisian town of Burdaard in the Netherlands to honor of his charity swim through the Eleven Cities of Friesland (11 steden in Friesland). 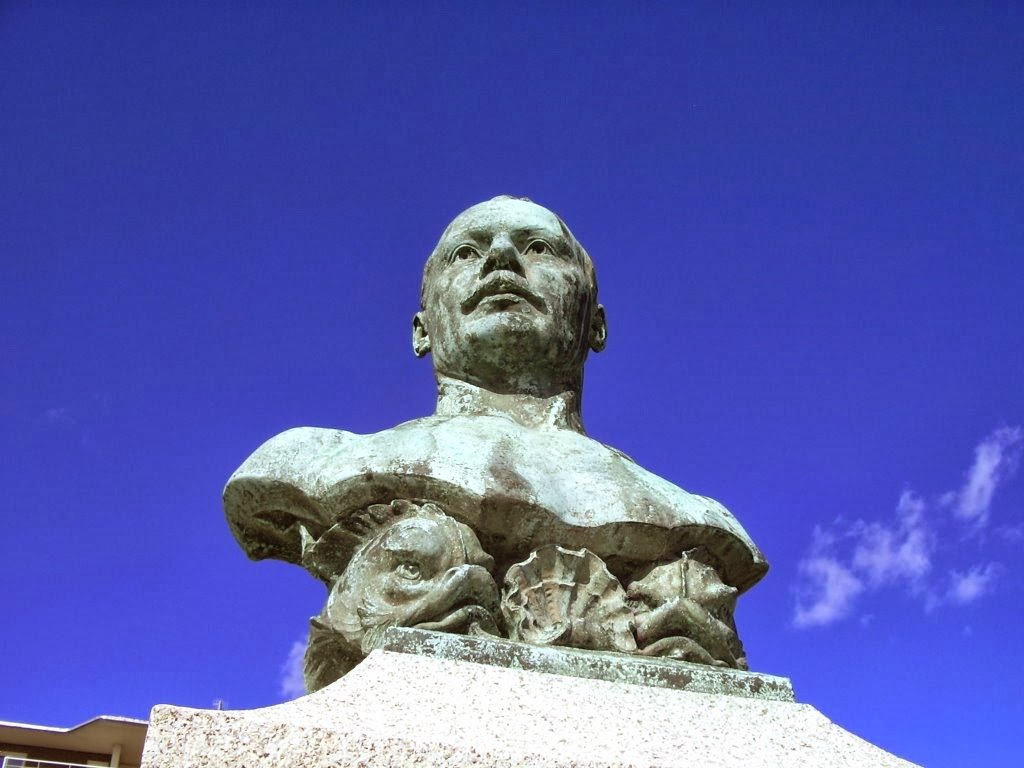 Right there with the Romans invasions, the building of the lighthouse and the bombardment during World War II, was the marker for the formation of the Channel Swimming Association
.”

A small partial listing of Memorial Open Water Swims is below: