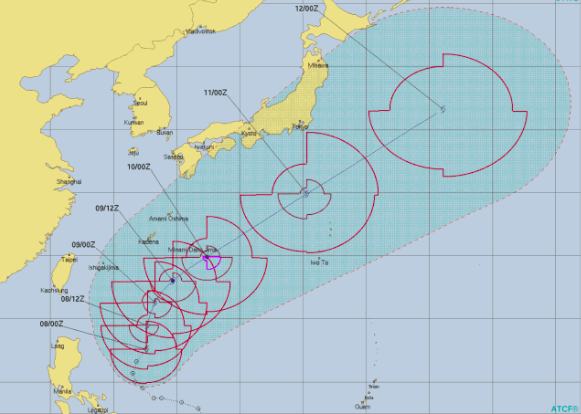 Ben Lecomte and Tropical Storm Maliksi were headed for a major collision as the storm is bearing down on the exact path of Lecomte’s 8,721 km transoceanic stage swim across the Pacific Ocean between Japan and California.

But mere mortals will always be defeated by Mother Nature when she rears up.

Joint Typhoon Warning Center forecasts predict Tropical Storm Maliksi will take a course near Tokyo right where Lecomte and crew are. Maliksi is forecast to peak at 70 knot winds at its center by Sunday with isolated thunderstorms to follow, with northeasterly wind up to 30 mph overnight Sunday through Monday afternoon.

No swimming or sailing under these conditions. Stay tuned about The Swim here and on The Swim website.

Lecomte’s live tracker can be seen here and a Facebook link is here as escort pilot Yoav Nevo head for safer waters.

Video above shows Lecomte swimming under much more tranquil conditions than he faces now.

Lecomte describes Day 4 on his blog, “We spent our Ocean Day adjusting our course to get out of the path of the storm and that meant moving backwards. I had mix feelings when I first saw land again. I was slowly starting to seep into my rhythm of swimming, sleeping, and eating and yet this big developing weather system forced us to turn back for cover.

The lush vegetation on the hills around Choshi stood tall on the horizon. We followed the coastline sailing south to get back to Yokohama, this was the only port in the region that could accommodate us in such short notice.

It was very comfortable on deck, a light breeze kept us cool. I was scanning the water surface for any sign of activity in the water. We were surrounded by small fishing boats but all I could see was floating debris, small pieces of plastic or foam were pupping every so often. The color of the water had changed from a clear deep blue to a murky dark green.

This alone brought me back to reality and the purpose of our expedition. The way we live on land, our daily activities and behavior have a direct negative impact on the ocean and put it in peril. More than ever I am determined to use this amazing expedition as a platform to get attention to this issue and invite the audience to think about how we can all make some changes in our daily routine to become a better steward of the ocean and protect it as we cannot live without it.”