A Day In The Life Of A Professional Marathon Swimmer 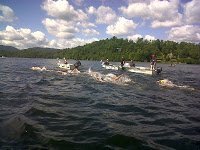 During the first hour at the Traversee Internationale du Lac Memphremagog, Petar Stoychev of Bulgaria was busy – real busy.

Because of the relatively slumbering pace from the beginning, the men’s and women’s field were bunched together in a tight pack. Bumping and swimming in close quarters was not what Petar had in mind so early.

Under blue skies with patchy clouds and a slight breeze of 11 kph, Petar alternatively stretched in the water during the FINA Open Water Swimming Grand Prix, swam to the left of the main pack, swam shoulder-to-shoulder with Shelley Clark of Australia, swam behind Rudolfo Valenti of Italy, swam off by himself away from the pack, zig-zagged trying to find his own space, sighted between every 3-9 strokes, yelled at the boat drivers for cutting in front of his path, fixed his swim cap and swam between 64-68 strokes per minutes as he constantly maneuvered himself between and around his competitors. The patience and cunning of the most successful professional marathon swimmer of modern times was impressive.

During the early goings, Petar bounced around the lead pack – from second to ninetheenth and from left to right – confident in his abilities to turn on his speed at any time.

After one hour and 45 minutes, he moved into the lead for the first time and stretched out the lead and the pack as swimmers started to fall off the end. Always with an eye on the lead boat with its huge FINA flag fluttering in the increasingly strong wind, Petar moved left and the entire pack moved left. Petar moved to the right and the entire pack shifted with him. Petar slowed and then everyone else slowed.

As the winds got stronger, Petar went to work. He picked up his stroke tempo and he went after the now-leading Simon Tobin of Canada. 3 hours and 30 minutes into the race and the race suddenly transformed itself from a warm-up to race.

By the halfway point, Simon had built a 100-meter lead, but Petar, Mazen Aziz, Damian Blaum of Argentina, Pilar Geijo of Argentina and Xavier Desharnais of Canada were patiently chasing the leader. The rest of the field, with Evgenij Pop Acev of Macedonia in sixth, was well behind with 17K to go.

To augment his 72 stroke-per-minute pace, Petar started to throw in a 4-beat kick and chip into Simon’s lead as the swimmers were swimming with the winds now – not against as they did in the first half of the out-and-back course on Lake Memphremagog.

Simon’s temporary lead of 100 meters became 80. 80 became 40. 40 became 20 in only a few minutes with the energized Bulgarian swimmer picking up his pace.

Petar’s stroke-per-minute tempo is illustrative of his overall pace – and how he constantly shifted gears depending on the situation:

Within a 6-minute span, Petar, Mazen and Damian caught up with Simon. But once they caught up, the veteran shut his high-speed engine down again and slowed to 60 strokes per minute. Even with Damian, Simon and Mazen switching from freestyle to backstroke with an occassional breaststroke thrown in, there was no way Petar was going to take charge…yet.

Damian stopped…and so did Petar. Simon switched to backstroke…and Petar slowed to a crawl. Mazen went to breaststroke…and Petar floated to fix his cap and goggles. Xavier downshifted…and Petar stretched out his arms. With every move of his younger competitors, Petar had a counter-move.

Sitting in his guide boat, Petar’s coach looks content and unconcerned. Their plan is to be in the hunt and, like a shark, attack only at a time of his own choosing. When will the attack come? His competitors knew it was only a matter of time. But Petar waited and waited.

“Too slow,” encourages Damian’ coach as the flotilla of spectator boats gains in size and variety. “Pick it up, guys.”

The floating fan base watching the race from boats of all kinds following the lead swimmers wanted to urge the men on. But stroke by stroke, the men wait for their competitors to take a lead.

Finally, after 25 minutes of tactically slow swimming, Simon had enough. There would be no more backstroke, breaststroke or stretching in the water as the finish became visible in the horizon.

Yet, Petar’s influence remained. Five hours into the race and the whiteboards were still filled with instructional messages about Petar: “Petar is 5 meters behind” or “Petar on left“.

But the pace with Damian, Mazen, Simon, Xavier and Petar remained casual and pedestrian. But the stress started to build.

“Swim by yourself!” complains Simon directly to Mazen who drafted too closely for Simon’s comfort. “Why do they always touch my feet?” complained Petar, shaking his head. The athletes were respected friends outside the water, but heated rivals during the race.

The mind games continued, but one constant was for certain: Petar still waited for his time to take the lead.

His tempo continued slowly, surely and steadily. He built up to a cresendo:

As the top men slogged their way down the lake, Petar had plenty of time to think and plot yet another plan to victory. His history in la Traversee since 2000 is unprecedented and extraordinarily impressive:

With 8K to go, Simon got the quintuplets to finally separate. Within sixty seconds, the 5-man pack split into three distinct groups – Mazen, Petar and Xavier to the left and Simoq and Damien to the right.

7K to go, the lead pack dwindled to a 4-man race. Again, they surged and again they shut down their engines.

Petar’s SPM pace went from 60 to 68 and then back down again, but he was always careful to stay out of the lead when the two packs converged again. When the pace slowed to a crawl, Petar stretched or fixed his swim cap…over and over again. “I need to have my cap on at the finish,” explained Petar.

Their pace, of course, was relative. Despite their variable speed, the lead men still created an increasingly long separation between them and the rest of the professional swimmers in the 71.6°F (22°C) dark waters of lac Memphremagog.

Petar had plenty of company with over 50 boats – watercraft of all kinds filled with cheering fans – accompanying him and his competitors to the finish line in Magog. With the hopes of Quebec riding on his shoulders, the Canadian Simon made a move that snapped the others out of their doldrums.

With Simon making a final surge, Petar correspondingly picked up his stroke-per-minute tempo to 74 and finally to 80 as he started to use his legs with an occasional 4-beat kick. 15 meters separated the conga line of swimmers, each right on the feet of each other.

Once past The Three Little Sisters, three small islands in the lake about 3K from the finish, the quadruplets were all still in the game and were still very aware of everything around them – including Petar’s move to the front.

“Want Red Bull?” “I can see the end, GO!” “Pick it up!” were just some of the messages shown by the coaches in the escort boats.

But down towards the end, Petar showed his true colors again…gold.

Separated from Damian and sweeping past Simon, it was a 2-man race between the 9-time winner en route to another victory and Mazen, the Egyptian star currently studying at Southern Illinois University in the United States.

Mazen was hanging on to Petar like a baby seal to its mother…around a shark. Mazen was not about to let go, but Petar, who has successfully shaken off all competitors in the lakes of Quebec since 2001, still have much left in his tank.

With 600 meters to go, Petar threw it up another notch that Mazen could not match. At 80 strokes per minute with a 4-6 beat kick, Petar made his last spurt while being guided towards the finish by over 60 honking watercraft, a TV helicopter above and thousands of fans onshore, estimated to swell to 10,000 by the evening’s awards ceremonies.

At 300 meters, Petar’s lead was a comfortable 30 meters as he soaked up the cheers from the crowds.

Meanwhile, Simon also gave it all he had. “I tried to go and I knew people said it might not work, but I had to try,” said the 25-year-old from Quebec who held off Damian at the finish.

Petar finished the 34K marathon swim with several strokes of butterfly in a final time of 7:38:30. He waved to the crowd and quickly jumped out of the lake to give interviews to the assembled TV and newspaper reporters.

Another day, another dollar.