Dealing With Apex Predators Of The Deep 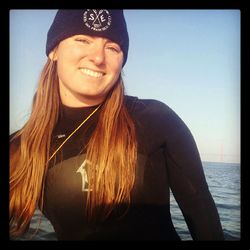 We posted an article on the concept of Fight-or-Flight Response When Sharks Are Spotted (here).

Both Olympic swimmer Gary Hall Jr. and Farallon Islands relay swimmer Cathy Delneo have encountered sharks while in the ocean.

They each weighed in about their personal recommendations on how best to deal with the apex predators of the deep.

“I find sharks to be similar to dogs in that they sense and respond to fear, panic and anxiety in undesirable ways,” says Hall who trained in the open water 60-65% of the time between his medal-winning performances at the 2000 and 2004 Olympic Games. 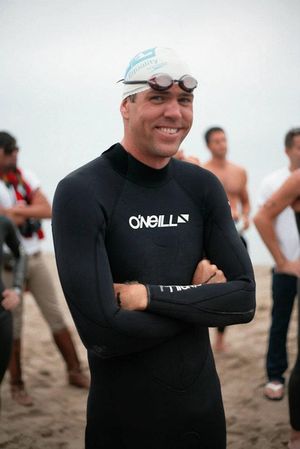 “Heightened excitement begets aggressive excitement. There is no out-swimming a shark.

Like if you encounter a bear or mountain lion; remain calm, make yourself appear as big as possible, keep eye contact and make slowly, gracefully, powerfully, and proficiently – demonstrating you are aquatically adept, not an injured creature – and calmly to safety. Praying is optional for sharks over 8 feet
.”

Cathy Delneo, who was bitten by a tiger shark off the North Carolina shore in America, further expands. “I think that just as there are different swimmers with different personalities and different ways they might respond to an animal in the water, each shark has an individual personality and specific objectives at different moments in time. Because of the differences in sharks, there’s probably not one best way that a swimmer can respond to every shark situation. 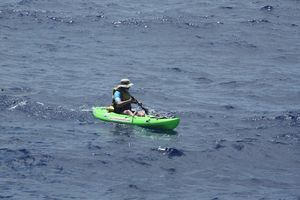 That said, what Gary is saying seems true.

Sharks seem likely to respond to the anxiety a swimmer is expressing just as dogs do. The best reaction in general seems to be to keep an eye on the shark and move away from it as smoothly and steadily as possible. But if it actually attacks, then be ready to defend yourself.

I plan on trying the tickle the gills approach if I’m ever in that situation – hopefully I never will be again, though!

Bottom photo shows Richard Clifford in shark alley in the Cayman Islands who experienced several shark encounters and one frightening shark attack (read here) as he was paddling for Penny Palfrey during her 68-mile channel crossing in the Cayman Islands. Courtesy of Image by Spike.