Dealing With Red Devils In The Open Water 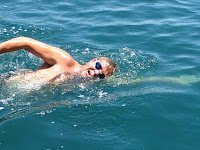 Ocean swimmers understand the inherent risk of venturing beyond the shoreline. There are currents, tides, waves, Portuguese man o war, cold water and rough conditions to deal with.

In some cases, there are also the deadly box jellyfish, sea snakes, orcas and sharks.

But there is also the red devil, otherwise known as the Humboldt squid or jumbo flying squid.

These 50 kg monsters of the dead are large (1.75 meter), predatory, carnivorous squid that move in groups of up to 1,200 individuals.

They swim at speeds up to 24 kilometers per hour (or 15 mph or 13 knots) with their tentacles have suckers lined with sharp teeth with which they grasp their prey and drag it bleeding and helpless towards their large, sharp beak.

What can be viewed most disconcerting to an ocean swimmer is that the red devils are attracted to lights or illumination at night and they rise closer to the surface of the ocean from dusk to dawn where they reportedly hunt their prey in a cooperative fashion.

So imagine the risk of an ocean swimmer like Paul Lundgren who will be swimming in their midst over a 40-45 hour adventure across the Sea of Cortez in Mexico. He has to swim at night, possibly two nights, in an area where the red devils hunt in mass near the surface at night, taking advantage of the dark to use its keen vision and its appendages extended forward to feed.

As the red devils approach its victims, they open their eight arms and extend two long tentacles covered in sharp teeth to capture their prey as serious lacerations cut into the flesh in a matter of seconds.

The red devils have attacked deep-sea cameras and scuba divers. Like piranha, they are also are reported to quickly devour larger prey when hunting in groups. Since the 1990s, Mexico has been among the most prolific areas for landings of the red devils where they occasionally feast on sharks and struggle with fishermen in the warm Pacific waters off the coast of Mexico.

That is one hell of a problem to deal with.

But it is Lundgren who is the visitor to the the world of this denizen of the deep.

Lundgren’s 76-mile swim across Mexico’s Sea of Cortez will go from west to east, from Baja to the Mexican mainland, starting the swim at 3 am on June 11th in Loreto with an estimated onshore arrival 45 hours later near Guayamas. His swim is supported by a crew of ten on the Mariana, a fishing boat out of La Paz, and UCANN, a leading nutritional supplement company, and La Mision Hotel of Loreto, Baja California Sur.

For more information, follow Paul and his crew here.