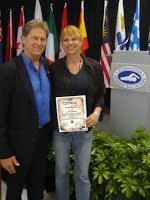 The film about Heim-Bowen‘s obstacles and victories as a 50-year-old college swimming freshman has screened at two film festivals – and received awards at each.

“Suzanne’s story is an inspiration to all women, whether they are 15 or 50 or 80 years old.

She doesn’t let physical or mental obstacles get in the way of a successful outcome. She truly believes that you don’t have to feel well to do well and that’s a pretty empowering perspective
,” explains McDonald, “Like her, I’m an athlete, so I know what that means in its simplest terms – blood, sweat and tears. My challenge was to capture the spirit of a champion on camera.”

California’s Diablo Valley College recruited Heim-Bowen at the age of 50 to compete against swimmers 30 years her junior. The Masters Swimming Hall of Fame inductee accepted the challenge just as she accepted challenges all her life in the oceans from San Francisco to Dover. The film documents this record-smashing season and chronicles the 30 years of open water exploits leading up to the 2009 DVC swim season.

“I saw the film and was moved,” said Rob Butcher, Executive Director of U.S. Masters Swimming who urged McDonald to screen the film at the national championships. “Deborah captures the heart of Suzanne in this inspirational story and I know it will resonate with the Masters swimming community so we’re excited to offer this showing.”

“We are pleased to have Suzanne join the other luminaries in the sport at the International Marathon Swimming Hall of Fame and 2012 Global Open Water Swimming Championships on the Queen Mary in Long Beach,” remarked Steven Munatones. “Our sport has so many heroes, but it is rare that their story is put on film. Deborah captures what makes Suzanne a champion and one of those rare individuals who can push themselves beyond the imaginable.”

The 50 year old FRESHMAN: Suzanne Heim-Bowen will also be shown at the 2012 Global Open Water Swimming Conference on the Queen Mary in Long Beach, California. Both McDonald and Heim-Bowen will be in attendance to explain the production.