Defending Champion Is Remembered In the ISHOF Mile 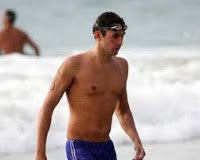 Fran Crippen was remembered in many ways and at many levels at yesterday’s 41st annual Ft. Lauderdale Roughwater Swim.

Sid Cassidy, one of the most experienced watermen in the world and starter at the 2008 Olympic 10K Marathon Swim, gave a touching tribute to Fran before the race that drew over 250 swimmers to the Ft. Lauderdale beach: