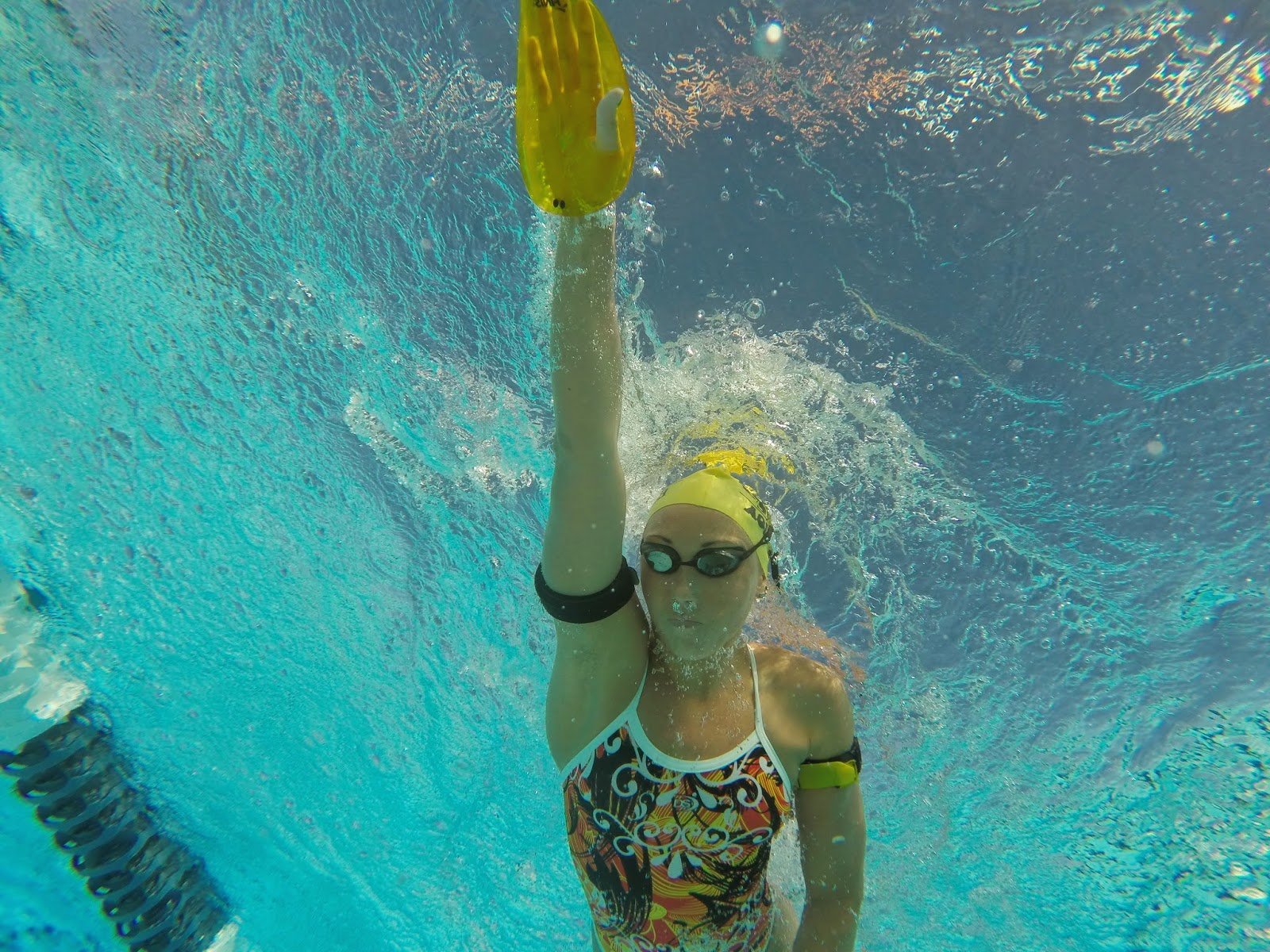 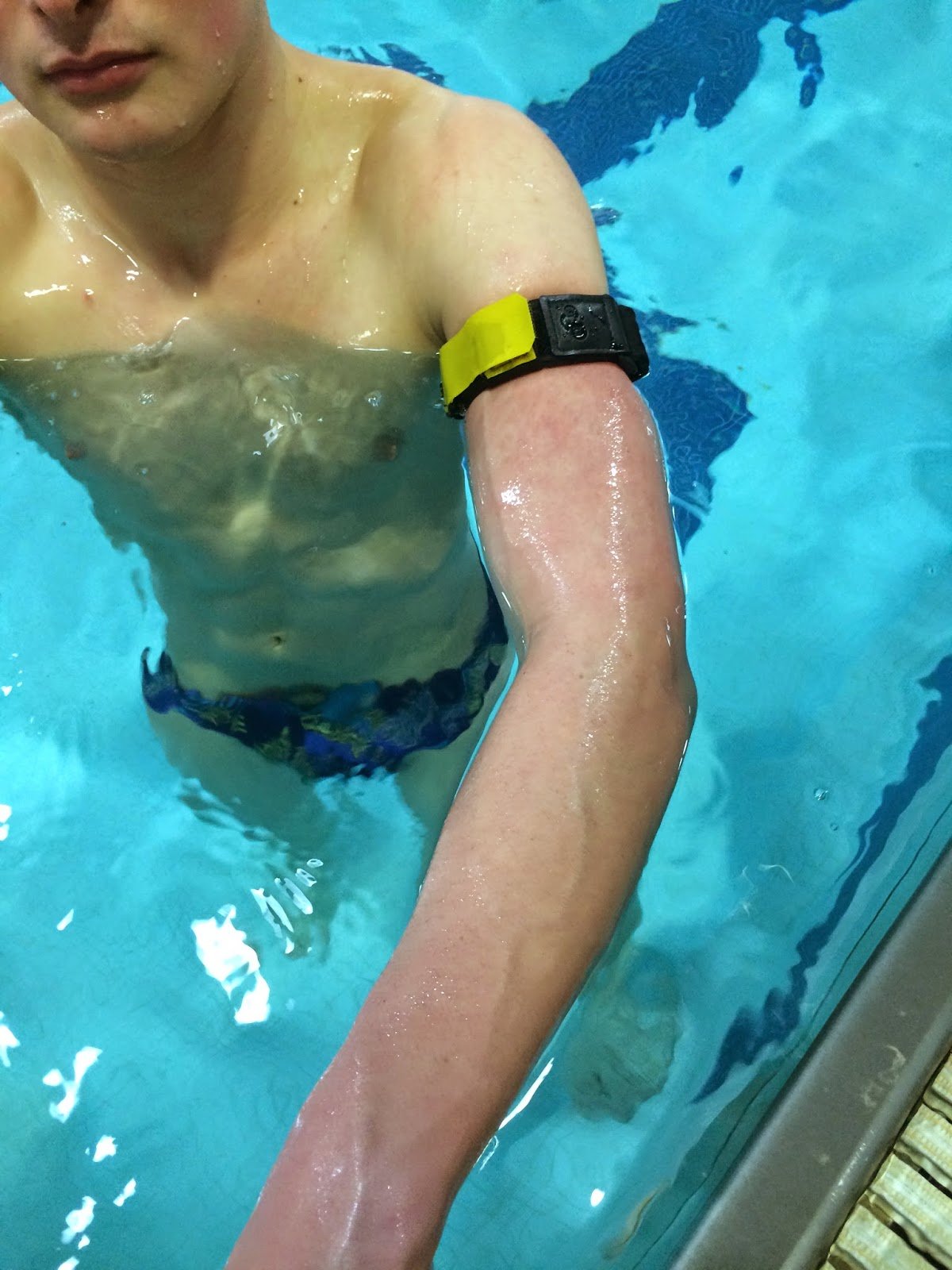 In Arizona during the 1990s, two-time High School Swimmer of the Year Misty Hyman started to put large rubber bands around her upper legs and upper arms under the guidance of her Hall of Fame coach Bob Gillette.

Gillette was innovative and came up with the idea of placing big, thick bands around Hyman’s arms and legs in order to restrict the blood flow to her extremities.

After Hyman entered Stanford as America’s most formidable high school star in 1997, she continued to use the rubber bands around her legs and arms during certain sets under the guidance of renowned Olympic coach Richard Quick.

A few of her teammates tried the bands around their legs, but Hyman remained a lone star in the revolutionary training modality.

Combined with her innate talents and hard work, her training regimen worked as Hyman graduated from Stanford University with 9 NCAA titles to her credit. Most famously, Hyman put all those years of training to good use when she pulled off one of the greatest upsets in aquatic history when she defeated Susie O’Neill at the 2000 Sydney Olympics. Defending Olympic champion Neill had not lost a 200-meter butterfly race in 6 years, but Hyman put it all together physically and mentally on swimming’s biggest stage in Sydney.

When Hyman retired in 2004, the close of her career spelled the end of those thick rubber bands.

But a young American coach, Christopher Morgan, was also on the pool deck helping Quick mold Olympic champions and NCAA record-holders at Stanford. He watched Hyman go from a high school star to Olympic champion. But he always wondered about those rubber bands. Why wasn’t anyone using them? What exactly did the bands do physiologically? When the limbs are engorged in blood, what happens to the body?

Hyman continues to be a role model for swimmers and people of all walks of life. Gillette currently serves as a USA Swimming Master Coach while Quick sadly passed away in 2009. Morgan found his own path to Olympics as coach of the Swiss team as well as a coaching stint at Harvard University.

While at Harvard, Morgan met an innovative Japanese doctor who had independently developed blood flow moderation exercise in the 1960s. “Dr. Sato created KAATSU which means ‘additional pressure’. It has been used by hundreds of thousands of Japanese for sports performance, fitness, and rehabilitation over the last several decades. When I first saw Dr. Sato’s sophisticated pneumatic KAATSU bands with sensors inside, it reminded me of Misty’s rubber bands. It was déjà vu in the pool with a highly sophisticated Japanese technological twist.”

Dr. Peter Lansbury, a former Princeton swimmer and currently a professor of neurology at the Harvard Medical School has been using KAATSU bands for several months. He explains, “Dr. Sato discovered the effects of blood flow restricted exercise that he calls KAATSU. He has shown remarkable results with Japanese Olympic medalists and pro athletes and is now working with the Chinese Olympic Committee. Fortunately, he also shared his knowledge with our colleagues here at the Harvard Medical School. But Chris has really run with KAATSU’s applications with his age-group swimmers at Northshore YMCA.”

Morgan describes his pioneering KAATSU training with three young swimmers on his team.

“Carson Christuk is a 16-year-old breaststroker. He has been using KAATSU Aqua 3 times per week after breaking his wrist and dislocating his kneecap during 2013. He says KAATSU has helped reduce and occasionally eliminate the lingering pain of his injuries. But it is the improvement in his best times that have been most satisfying. He was a 2:14 200 breaststroker in September 2013 and then dropped his time to 2:11 with a taper in December. After starting KAATSU Aqua in January, he pulled a 2:09 in February and then ripped off a 2:03 in April at the YMCA National Championships.

Jake Bennett is an 18-year-old freestyler. He had a bad rotator cuff injury since the summer of 2013. It would flare up under high stress or due to high volume. Initially, he used KAATSU every day for 2 weeks to see any improvement. During the first week, he only used the KAATSU Aqua bands on his legs, but then he started up with his arms on week 2. After 2 weeks, his pain was almost gone for the first time in 3 months. Like Carson, his performances skyrocketed. He was a 1:44.9 200 freestyler in September 2013 and did a 1:46.5 in October while he was in pain. But after starting KAATSU in November, he dropped to 1:44.5 in December and just did a 1:41.2 swimming pain free at the high school state championships
.”

Morgan has also used KAATSU with four of his disabled swimmers including 3 Para-National Team swimmers and 1 world record holder. “The Japanese use KAATSU Aqua bands with individuals who are missing limbs or who have had strokes. We place the KAATSU bands on both limbs of our disabled athletes while we carefully identify and monitor the pressure. While it may look like simple bands on the arms and legs, there is a specific protocol that Dr. Sato developed. Like the American Olympic skiers and jumpers who use KAATSU, and the professional athletes in Japan, we look for a certain physiological state and then we work with our swimmers over intense, short periods with some pretty remarkable results.”

Dr. Jim Stray-Gundersen oversees KAATSU training with the U.S. Ski and Snowboard Association athletes where all the skiers and snowboarders incorporate KAATSU into their training regimen. The Sports Science Advisor explains how he has applied KAATSU at the Center of Excellence in Park City, Utah. “When we have injured athletes, they can do both KAATSU and Alter-G in order to maintain their strength and aerobic conditioning as they recover. We are also starting to incorporate KAATSU training into the regime of our uninjured athletes. KAATSU allows safe (very light weights), maximal workouts to failure in short periods of time (about 15 minutes), with positive results coming in as little as 10 sessions.”

What Bob Gillette and Misty Hyman were working on in the 1990’s may have been more profound that they may have initially realized.

“When the KAATSU bands are applied correctly with the optimal pressure which is different for everyone [using the KAATSU Nano unit shown below], the arterial in-flow to the limbs is restricted and the deep venous out-flow is impeded,” explains Dr. Stray-Gundersen. 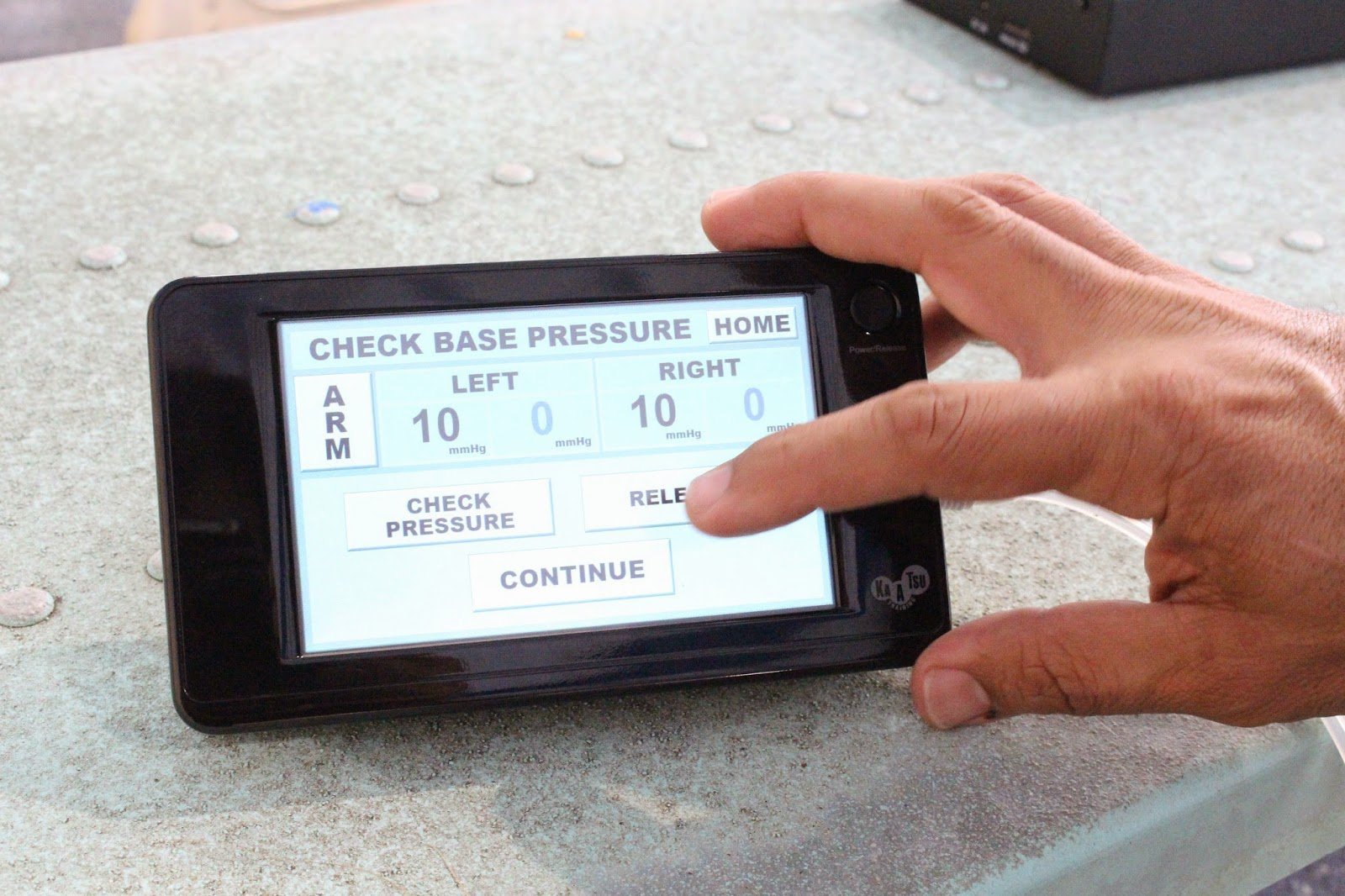 “As the athlete moves, whether it is swimming or doing dry-land exercise, the capillary-venous space becomes distended and congested in the muscle distal to the KAATSU bands. Muscle contraction under these conditions of impeded blood flow and congested vascular space uses up intracellular phosphates energy stores and oxygen at a rate greater than the circulation can replenish them.

Metabolic waste products accumulate and homeostasis in the muscle is lost
.”

As the athlete continue to exercise with the KAATSU bands, the intensity of effort rapidly increases. The discomfort they feel at the end of a race is quickly achieved during practice. “Consequently, as the tissue becomes more hypoxic and energy stores depleted, anaerobic glycolysis attempts to compensate by increasing its rate, which produces some ATP, but also produces a marked disturbance in muscle homeostatis that ultimately leads to muscle failure, or in other words, not being able to continue the exercises,” says Dr. Stray-Gundersen.

The effects that have been seen in combative sports (boxing, wrestling, judo), baseball, rugby, and numerous winter sports in Japan and China are now beginning to be understood by Morgan and others in the aquatic world.

Dr. Stray-Gundersen describes his perspective. “We think, but have yet to prove, that there is a “local” effect and a “systemic” effect from KAATSU training. When blood flow is restricted and muscle is asked to exercise with a restricted, engorged circulation, homeostasis is lost in the exercising tissues below the KAATSU belt. The development of hypoxia, acidosis and various other metabolites outside their normal concentrations, stimulates a positive adaptive response in the local muscle and vasculature. Increasing concentrations of Vascular Endothelial Growth Factors (VEGF), which has been shown experimentally, is an example of the “local” effect.

In addition, we think there is an important “systemic response”, where the loss of homeostasis is communicated to the brain (KAATSU practitioners are aware of the discomfort in their muscles) and the brain responds by increasing breathing and heart rate, as well as initiating an “anabolic” cascade. The release of growth hormone from the pituitary, which has been shown experimentally, is an example of this “systemic” response. This has the effect of causing muscle both distal to the KAATSU belts and proximal to the belts to adapt and get stronger
.

In essence, KAATSU presents a very effective and highly efficient mechanism that coaches and trainers can implement with their athletes to get increasing circulating levels of growth hormone and VEGF, that is otherwise difficult and very taxing to do.”

Essentially back in the 1990s, Hyman had a secret weapon in her training regimen that was far ahead of her time. While her strength off the walls, technique, stamina, and mental outlook all came together at the Sydney Olympics, Hyman had been uniquely developing her vascular system over the years.

At the same time half a world away, KAATSU began gaining a foothold among athletes in Japan. Based on his own research and patented concepts and equipment, Dr. Sato began conducting medical and scientific research with the University of Tokyo Hospital and other researchers and physicians in Japan. With a rapidly aging population, KAATSU started to gain adherents throughout Japanese society. KAATSU was even used with comatose patients and those with neurological diseases.

For every Japanese Olympic medalist who used KAATSU, there were many more individuals – from teenagers to their great-grandparents – who integrated the KAATSU in their fitness and rehabilitation programs. Last year, KAATSU has begun used by Chinese and American professional and Olympic athletes in various sports.

Its first use in the aquatics world in the U.S. was by Vanguard Aquatics in Huntington Beach, California. Coaches Uros Dzelebdzic and Sasa Branisavljevic have quickly developed one of the best age-group water polo programs in the country. They continue to refine KAATSU’s use with their age group and high school players.

Dzelebdzic summarized his first test, “KAATSU appears to be an effective short-term training method that improves performance significantly more than traditional high intensity training. Athletes who used KAATSU had almost a 4% increase in speed compared with athletes who did not use KAATSU.”

But like Gillette, Dzelebdzic may only be scratching the surface of KAATSU.

“Together with Dr. Sato, we established the Center for KAATSU Research at Harvard Medical School and the KAATSU Research Foundation,” says Professor Lansbury. “We base our research on the specific protocols for safe use that Dr. Sato discovered, researched, and confirmed over the past 40 years. Each athlete uses different KAATSU pressures that are appropriate to them; the coach confirms this pressure before workout which can differ from day to day.

KAATSU can be used widely in various realms, from corporate wellness to the NFL. Besides exploring different medical and therapeutic possibilities of KAATSU, the sports performance possibilities for this technology are obvious based on the research and practical applications at all levels of Japanese sports and medicine
.”

KAATSU Aqua will be introduced at the 2014 American Swimming Coaches Association World Clinic in Jacksonville, Florida this week. For more information, visit www.kaatsu-global.com.