Denizens Of The Deep 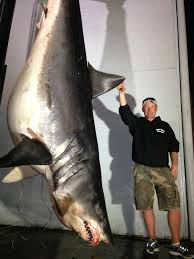 Shooting the pier is usually a surfing move between the pilings of the pier, but several swimmers were shooting the pier in preparation for the annual pier swim in the city known as Surf City, U.S.A..

But as they passed under the large concrete pier pilings, covered with barnacles, they imagined what could be down in the depths.

And now they know what was down there. Jason Johnston caught the largest shortfin mako shark on record (12-foot, 1,300+ pound shortfin) was caught in Huntington Beach on Monday. Johnston, who was on a charter fishing trip, describes his catch, “He took out a quarter-mile of line. And five times he came out of the water over 20 feet.”

While we prefer to have these marvelous creatures remain in the ocean roaming as they do as apex predators, we also understand the fear that many individuals have to swim out past the surf where predators are known to exist.