Dennis Miller Leaves Behind A Wake Of Success 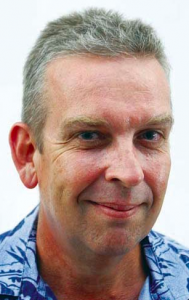 Dennis Miller Leaves Behind A Wake Of Success

Courtesy of WOWSA, Fiji. There was arguably no greater supporter of open water swimming around the world who behind the scenes and ahead of the curve than Dennis Miller of Fiji. Miller rose from the tiny swimming nation of Fiji to nearly the top of the FINA hierarchy over the course of his five-decade career as a swimmer, swimming father, coach, referee, official, volunteer, administrator, and Olympic visionary.  The 61-year-old FINA Vice President passed away yesterday after a long bout with cancer. He was inducted in the International Marathon Swimming Hall of Fame in 2013 and was appointed as a member of the Executive Committee of the FINA Bureau, one of the highest positions that can be obtained within the FINA Family. Miller will be remembered as the visionary who promoted the Olympic 10K Marathon Swim concept that eventually led to the sport of open water swimming being added to the 2008 Beijing, 2012 London, 2016 Rio, 2020 London, 2024 Paris and 2028 Los Angeles Olympic Games and, with its addition, profoundly changed the sport of open water swimming in myriad ways. Steven Munatones said, “Dennis, in his own profoundly quiet, passionate and professional way significantly elevated the sport in the eyes of the general public throughout the world in myriad ways – none of which were as great as when he helped shepard marathon swimming into the Olympics and then fashion the sport so 10 kilometers became a distance in which tens of thousands of swimmers around the world aspired to.  His legacy will be never forgotten, from his native Fiji to open water swimming races around the world.” Condolences came from around the world: Sid Cassidy, a long-time colleague, said, “It is with great regret I share love and condolence to the entire Miller family and beyond to Dennis’ extended aquatic family… we are indebted to your vision and leadership my brother … we miss you already.” Yasmin Tyson wrote, “Condolences to the Miller and Fina family. It was a pleasure to have met and interacted with him.” Professor Ricardo Ratto of Brazil wrote, “My condolences to the family. Dennis was a great friend. I had the pleasure to host him and her daughter during a day in my home during the Olympic Games in Rio. Already missing his leadership and friendship. He was present during one of the most difficult moments in the history of our national Federation! What a loss. May God bring some comfort to the hearts of Miller Family.” Fellow FINA referee and administrator John West of New Zealand wrote, “Dennis was a great mentor for Oceania and open water swimming and got much done in his quiet way. He has been an example for many of us and we will miss his guidance.” Copyright © 2008 – 2019 by World Open Water Swimming Association