Diana Nyad Update From Key West, Looking For The Doldrums 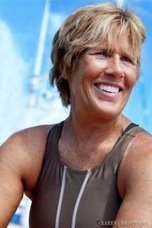 With Diana Nyad and her key crew members now in Key West, Florida undergoing their final preparations for Diana’s upcoming 103-mile swim between Cuba and Florida, Diana went through her final week of hard training.

It was at a level that in mind-boggling for any marathon swimmer, but especially one who is 61 years old – one 7-hour training stint, another 8-hour training swim and a 9-hour ocean workout. “Only short tapering swims to come,” said Diana who is characteristically optimistic. “The boats are all good. Great crew in every regard. All government permissions in place.”

With the average water temperature in the Gulf Stream at 85°F (29°C), she is looking for the water is warm up slightly to 86-87°F (30-31°C) to succeed over the estimated 60-hour solo swim. “It is too hot during the first half, but once I start losing metabolic rate, I will need the warmth for the last half.”

Once the ocean temperatures warm up, then she will start looking for the Caribbean Sea to be ironed out and flat as possible in what is known as the phenomenon as The Doldrums. Once she starts from Cuba, the CNN cameras will be rolling.