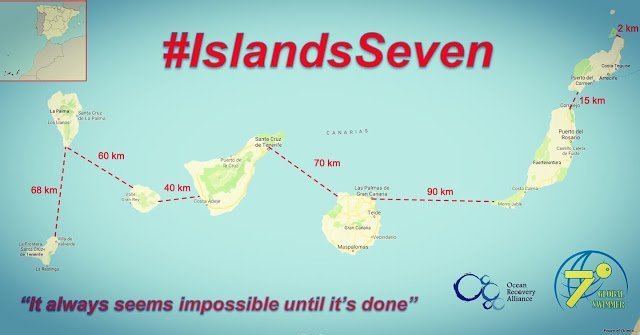 Diego López Dominguez describes his newest challenge, the Islands Seven. “Crossing the 7 channels vary in difficulty and length from 2 km to over 90 km. Three of the channels have never been completed before.*

I am currently liaising with institutions and brands, but my idea is to pursue the project through 2020.

As a good islander, I’ve always prided myself on acquiring international experiences without losing my identity nor my origins. Now that I’ve swum around the world, there’s nothing I would like more than doing a project back home. My new dream is called Islands Seven and it consists in uniting the eight Canary Islands – the last one would be the third longest channel swim in history.

I have it in me to dream big and to work hard until I do it. Stay tuned as the dream becomes a project, a challenge, and a reality.”

* If successful, López will be the first person to swim across the 68 km La Palma-Hierro Channel, the 60 km Hierro-Gomera Channel, and the 90 km Fuerteventura-Gran Canaria Channel, none of which have ever been crossed.