Differences Between Men And Women In The Open Water 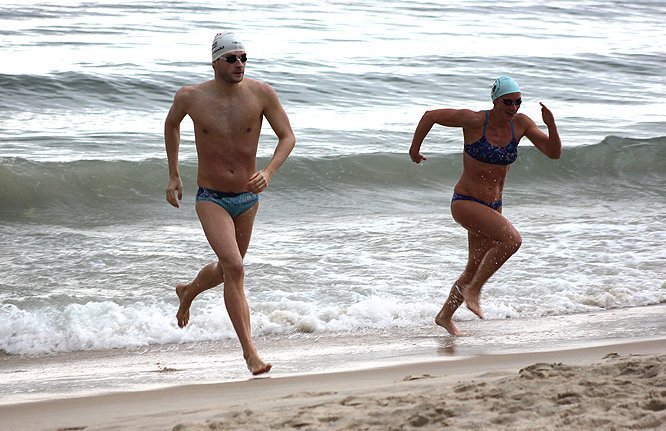 In publishing the Daily News of Open Water Swimming and managing different online properties like Openwaterpedia, WOWSA (World Open Water Swimming Association), and WPMSF (World Professional Marathon Swimming Federation) as well as databases such as I Got Stung and World Swimming Majors, we are very fortunate to have the opportunity to document information, write articles, travel the world, and shoot the breeze with thousands of swimmers, triathletes, adventurers, and endurance athletes every year.

As fitness and endurance sports becomes increasingly popular among the Baby Boom generation, we find the exploits of working adults and retired people to be beyond inspirational and truly heroic. Men and women, many with no previous athletic background, perform extraordinary feats in fresh and salt water under warm and cold, tranquil and rough conditions.

But we are frequently reminded of one major difference between men and women in our sport. It is said that Men Are From Mars and Woman Are From Venus, but in this area, the genders seem to be in different galaxies. That is, when we either have information or report on a women’s plans or attempts, we are occasionally asked to either keep this information confidential until the attempt is successful or to remove the information from our online properties (i.e., the public realm). Such requests are received nearly weekly – and it is our strict policy to adhere to their wishes.

These requests come from women of all ages, abilities and cultures. Curiously and conversely, these kinds of requests do not come from men. The few times that we can recall confidentiality is requested or that we are asked to remove information from the public realm from a man is when he is swimming with a team that includes a woman or he is paired with a woman on a duo swim.

We were deeply curious why this difference exists as it is one of the very few clear, major differences between men and women in the open water swimming world.

Out of curiosity, we asked over 100 female swimmers, triathletes and endurance athletes living across 5 continents in dozens of countries for their input, opinions and reasoning on these questions:

· Why do some women not want anyone to know about their attempts ahead of time?
· Why is there a need to keep these swims quiet?
· Why do some only want their swims publicly revealed upon success?
· Are there specific reasons some women make this request while such requests rarely come from men?

Their insight was fascinating. This is only a small sampling of the responses received. All replies were anonymously provided:

· “…My original thought was that for some reason women must feel that it is some kind of jinx to promote the swim before the attempt. Of course that is totally irrational, but that was my first thought…”

· “…personally, it means less pressure. Also, I found something truly delightful in surprising folks with my swims. It makes the challenge a little more interesting…and it will be fun to announce [my swims] the day before or after the swim. Perhaps its a confidence issue too. I’d like to think I can achieve my goals, but my experience so far with the ocean reminds me that Mother Nature is always boss…”

· “…I have a swim I am asking to keep confidential because it is a first. A good friend made the suggestion and I was able to get my A Team to help out. I will let you know about it when I succeed. I am pretty excited, but I don’t want anyone to jump my first…”

· “…this is prevalent in the corporate sector too, at least in Australia where women don’t want other women to know if they’re applying for a promotion. In a word fear and a lack of self confidence…”

· “…women are very different than men in the work place. They may not want their superiors to know that they are taking so much time to train and or have to possibly ask for time off to train or compete…”

· “…could it be that women are much more afraid of failure in the physical realm? Maybe women, like ethnic minorities, feel they have to be better just to be seen by society as good as. So perceived failure is truly terrible. Only success is allowed, so it’s best to keep attempts quiet unless they are successful…”

· “…some women are afraid of what they can achieve and are reluctant to toot their own horn. Other may not want that additional burden of everyone knowing to be in their head during their swim…“

· “…so women are treated differently than men is a given. I wonder if we take failure harder. I had my first ever DNF last year though I felt like I was in good company…”

· “…Simply put, I think innate characteristics are involved as well as the way girls and boys are brought up [differently], although this is changing to some degree. Throughout time, women have been in the background behind men so to speak. I think even that comes into issue on this subject…”

· “…22 years in the [work place] and 12 of those as the only woman taught me more than I should ever have to know about men. No matter what anyone thinks, men and women are very different. Things that seem natural and normal to them would leave me absolutely perplexed as to why. I often felt like I was in that other galaxy…”

· “…If it were me, I would do as Nike says and just do it! But I’ve got too many chores to do, mouths to feed, husbands to tend to, and old people to take care of…”

· “…women may feel guilty to admit that they want to spend this kind of time training and on themselves and for themselves, particularly women in a relationship or with a family…”

· “…women have a stronger since of guilt when it comes to do doing anything for themselves. Things that may take them away from family or the office…”

· “…women may also be more apt to back out at the last minute due to a family or office emergency. By keeping their intentions to compete private, nobody has to be disappointed when and if she decides to cancel…”

· “…women want to be recognized for their achievements rather than their attempts at achievement and for some reason, men don’t really care…” · “…similar to when woman do not like to let anyone know they are pregnant until they are far enough along to feel there in no chance of a miscarriage…”

· “…the main reason I was keeping it on the down-low is I did not want my mother to hear about it and have her get a bad night’s sleep worrying about me. One friend posted something online and I told her to take it down. I considered it my swim to talk about and felt no one else should be doing the talking for me. I accept the fact that when I enter something like [famous swim race], I forfeit that right to privacy…

· “…if the world was a perfect world by my definition, no one would know about my swims until after I complete them…

· “…I am one of those people who did not like to advertise our swims beforehand. Superstitious? Maybe. But there are so many variables with weather and all, we didn’t want to advertise the swim until it was underway. Since many of the swims [here] were ‘first time’ swims, we didn’t want to say we were going to do something and then it not materialize. We would feel stupid. However, once the swim was a ‘go’, usually a couple hours before I stuck my toe in the water then the press was called. Fear of failure was not it because I had a few of those learning experiences and I am okay with that. It was more: until all of your ducks were in a row don’t say anything. I say, approach your swim quietly and then when you know it is a go, send out your press releases. I have to say though, it seemed like when we did have a lot of PR before a swim, it sort of colored the decision of whether or not to ‘go’ and the atmosphere was circus-like. Plus, I like a small crew and press as it was just about the swim…”

We wonder what social scientists and psychologists think about these differences, insights and perceptions, but in the open water, Mother Nature and Father Time treat men and women with equality.