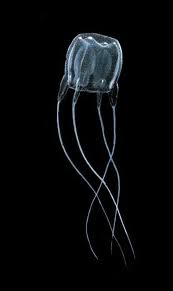 “Oh s**t!”
“Not bad; I can take those stings.”
“It feels like a branding iron pressed into the flesh.”
“They felt like little pin pricks.”
“Never had I felt such pain in my life.”
“It’s like a bee sting.”
“The pain was unbearable; like my skin was on fire.”
“They were a bit irritating, but it wasn’t such a big deal.”
“The venom…it was a living hell and nothing I did could alleviate the pain.”
“There were so many of them, but I was only really worried about swallowing one of those buggers.”
“It was unbearable. From my skin to my core, I couldn’t stand it.”
“The stings itched a little bit afterwards, but it was not bad.”
“Oh my God; it was terrible. I feared stings and avoided them for so long, but when we finally got me, it was worse than I imagined.”
“I don’t know, I didn’t feel any stings. I wore a wetsuit.”

There are over 1,000 known species of jellyfish in the world with new ones still being discovered. And it seems every swimmer has a different reaction to stings and the numerous different species. For some, one is enough. For others, they have thick skin in more ways than one. 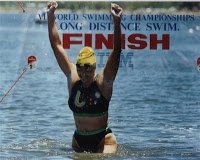 Back in 1991, Australians Shelley Taylor-Smith and Tammy van Wisse petitioned FINA to allow them to wear two-piece bikini swimsuits at the 1991 World Swimming Championships.

The innovative and competitive duo had good reason to seek special permission from FINA to wear the bikinis: there were blooms of jellyfish in the 25 km course in Swan River in Perth where the 25 km race would be conducted.

Fortunately for the pair, FINA issued a news release that stated the swimsuits were deemed respectable for competition.

“I wore this [bikini] suit because of the jellyfish that were everywhere…I wanted to be able to let them out [of my suit]…or get them out with easy access and not disturb my mental focus and mindset which they are renowned for doing,” recalled Taylor-Smith with a smile and a wink. “I won the race and gritted my teeth as I got stung.”

Did you smile or grit your teeth with a jellyfish sting? What is your reaction? Tell your story at I Got Stung.com.