Dive Into Peace In July In South Korea 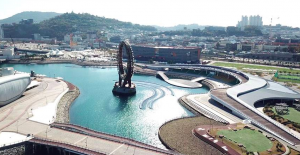 Courtesy of WOWSA, Yeosu Expo Ocean Park, South Korea. Dr. Julio Maglione, President of FINA, is trying to capitalize on its official slogan ‘Dive into Peace’ at the upcoming FINA World Championships. He requested that the North Korean team also participate in the largest aquatic competition in the world. He writes, “We respectfully request the North Korean team to take part in the upcoming FINA World Championships in Gwangju.  The North Korea’s participation in the Pyeongchang Winter Olympic Games opened the national reconciliation and the path towards peace in the peninsula wide, consequently led to the inter-Korean summit and the summit meeting between North Korea and the United States.  It is our hopes that we get together once again here in Gwangju as we did in the [2016] Olympic Games.” The four open water swimming events – 5 km, 10 km, 10 km mixed relay and 25 km races – will be held at the Yeosu Expo Ocean Park, located 130 km away from Gwangju.  The open water races will be held on the first week of the Championships between July 12th – 28th. Copyright © 2008-2019 by World Open Water Swimming Association