Diving In To Open Water 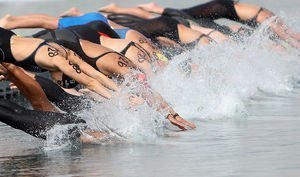 But over the 4-year quadrennial, the winning times of the men significantly dropped from 1:51:51 to 1:49:55. The women’s winning time dropped from 1:59:27 to 1:57:38. While conditions were different and cannot be considered equal, those (basically) 2-minute gaps illustrate how much faster swimmers have become between 2008 and 2012.

Swimmers are simply moving faster and faster in the water.

On every continent, swimmers are performing greater and greater feats at older and older ages. They are swimming further and further in colder and colder bodies of water. As they read, see, and hear about other swimmers going fast, swimmers around the world are elevating their game as they similarly believe they can get better and better.

For more information on the Olympic 10K Marathon Swim, visit the WOWSA round-up here and the Openwaterpedia entry here.