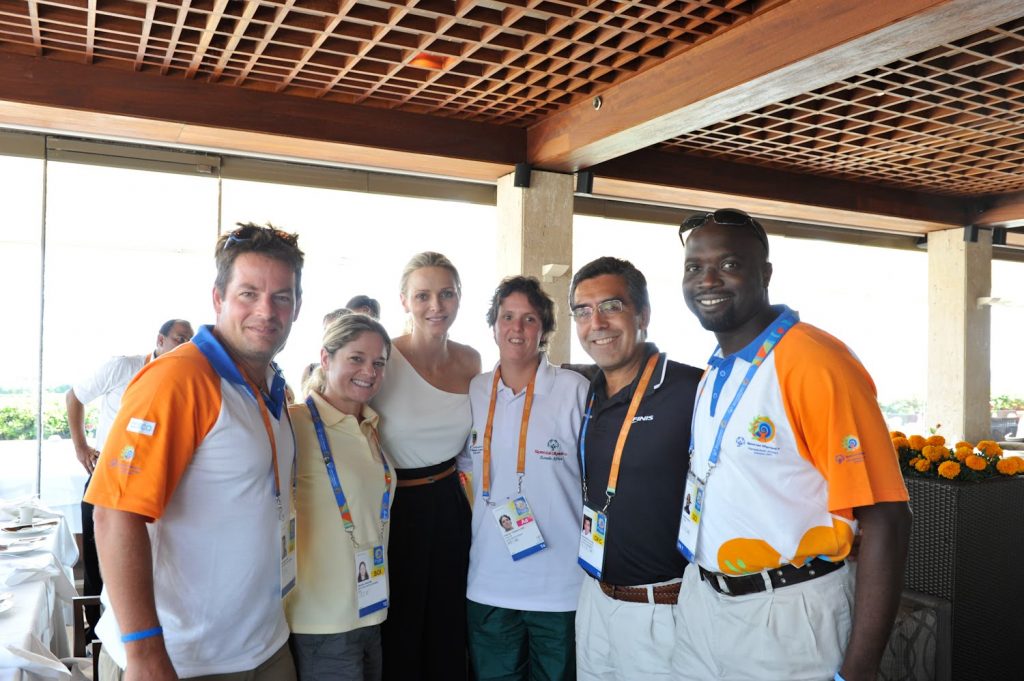 Encouraged by Charlene Wittstock, the future princess of Monaco who has a strong interest in open water swimming, the Special Olympics open water swimmers kick-started their world championships today in Athens during the divisioning heats of the 800-meter freestyle.

There was a lot of seriously fast swimming in the Olympic pool. The athletes were separated into groups based on their 800-meter pool times for Friday’s 1.5K open water swimming championships in Aegean Sea.

Maria Shriver and several politicians and VIPs were in attendance to cheer on the long-distance swimmers who competed in the 2004 Athens Olympics pool. The divisioning rounds for the 1.5K open water swim had some seriously fast swimmers including Elisabeth Mansoor of the Netherland (12:35) and Cornelia Fowler of South Africa (12:32, shown above together with Charlene and race officials).

With the possibility of winds coming up along the two-loop coastal course, not only the aerobic conditioning of the athletes will be demonstrated, but also their navigational skills will be tested in the 78°F (26°C) water.

Andrew and Cornelia are still considered to be the pre-race favorites due to their abundance of open water swimming experience in the Cayman Islands and South Africa respectively, but it should be a very tight race with a thrilling finish, not only for these top athletes, but also for all the 35 swimmers entered in the unprecedented event on July 1st.