Do You Want A Seaweed Burger With Fries? 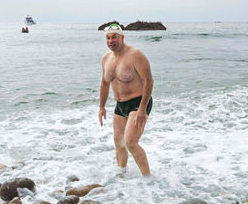 When Stephen Redmond became the first person to complete the Oceans Seven after he crossed the Tsugaru Channel in Japan, he did it with the most unusual and unexpected nutritional plan.

Because he was not used to existing on seaweed, tofu and fish (both raw and grilled) before his crossing from Honshu to Hokkaido, he went to the local stores and loaded up on white bread and butter.

Redmond fed his appetite with coffee and tea, bread and butter, in Japan.

During the lead-up to his swim, h completely skipped the traditional Tappi Misaki breakfast of rice, squid, seaweed and various pickled vegetables and salad – and the local populace’s even more exotic lunches and dinners, entirely culled from the sea.

But his white bread, butter and passion was enough to propel Redmond to cross the Tsugaru Channel and achieve the Oceans Seven .

One day sometime soon, Redmond may be compelled to eat seaweed – even if he does it indirectly and unknowingly.

An American animal sciences professor at Arkansas State University, David Newman, is currently feeding his hogs with seaweed. His cutting-edge research on 200 Berkshire sows is going well, even if the diet replicates that coastal farmers have been doing for centuries. “They’re really healthy. And if they’re healthy, they’re growing.”

According to Outside Magazine, an increasing number of American cattle and pig producers think seaweed may reduce antibiotic use on farms and the greenhouse gas emissions of cattle while producing more sustainable and nutritious meat. Heritage Foods USA offers seaweed-fed meat.

The Outside Magazine article summarizes the advantages of feeding seaweed to farm animals:

1. Reduction of cow production of methane by 99%.
2. Seaweed captures carbon dioxide from the atmosphere.
3. Seaweed requires no fertilizer, no feed, and no pesticides in natural environments.
4. Seaweed has high levels of vitamins, minerals, and Omega-3 fatty acids.
5. Resultant meat and milk is higher in Omega-3s and possibly less LDL cholesterol than conventional meat.
6. Taste is more than acceptable.