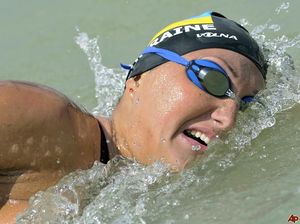 While Olympic sports like track and field, weightlifting, and swimming, and professional sports like cycling, American football and American baseball have been plagued by illegal drug use by some of its athletes in order to gain physiological advantages over their competitors, there have been very few allegations of illegal (or improper) known/proven drug use by amateur or professional open water swimmers.

This track record is excellent.

Steroid, meldonium or other such drugs and supplements can provide definitive benefits for land-based athletes and athletes who swim less than 1500 meters in a competitive environment in a pool, but it is does not seem that this same desire for athletes to enhance their stamina, strength or speed with drugs exists in the open water swimming world. Or is the situation the same?

As Michael Pirrie writes in the Sport Intern, “With the reputation of elite sport currently in tatters following a spate of corruption and doping scandals, the International Association of Athletics Federations’s decision [to ban Russian athletes from international competition, including the Rio Olympic Games] will also help to restore much needed faith and confidence in sport and especially in sporting bodies and officials. [Its decision] was music to the ears of the sporting public; a symphony of soaring high notes composed especially for honest athletes.”

Is this unfortunate situation similar in the open water swimming world, among competitive amateurs or professionals? Do you know?

While there is an anonymous avenue for whistleblowers to report drug users in sport (at www.sportsleaks.com, see article here), we wonder if drug usage among open water swimming exists. Or is it currently a non-issue? Or is it an issue, even if only among a handful of athletes (see here)? Or is it more endemic that we ever imagine?

If you have some concrete information or personal opinions to share about this possible issue in the open water swimming world, please send to [email protected]. Strict confidentiality is assured.