Don’t Get Beat With Beetroot 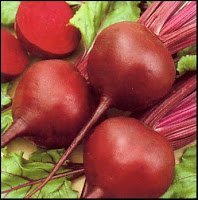 Some studies indicate that beetroot may be good for endurance athletes.

Kathleen Doheny reported in WebMD on research of the whole vegetable by Margaret Murphy, MS, RD, ACSM, a Clinical Dietitian at St. Alexius Hospital in Chicago. Murphy’s research showed that eating beetroot compared to cranberry relish before a workout gave runners an edge in speed (41 seconds) in a 5K run.

The study was presented at the American Dietetic Association’s Food & Nutrition Conference & Expo this week in San Diego, California.

Murphy tested 11 male and female recreational athletes (average age of 25) to eat the 200 grams of beetroot or the cranberry relish 45 minutes before a 5K run. After the beetroot consumption, the runners achieved times that were 3% faster compared to their times after eating cranberry relish with a significant 5% faster closing over the last mile.

Beetroot is rich in nitrates that are converted into nitric oxide by the body. The nitric oxide dilates blood vessels which results in improved oxygen delivery for sustained aerobic capacity.