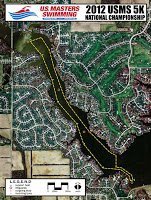 “Swimmers must be annual members of U.S. Masters Swimming or they can purchase a one-day license from USMS for an additional US$15. Plaques will be given to the top 3 overall male and female finishers and medals to the top swimmers in each male and female age group.