Doppelgängers In The Open Water 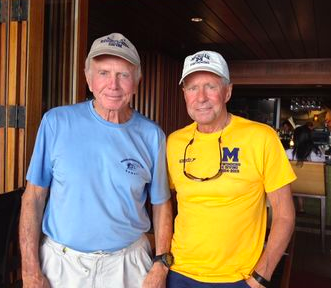 Mike Arbuthnot is an 85-year-old who co-founded the aQuellé Midmar Mile in South Africa. Next year, he will compete in his 45th consecutive race, an unparalleled streak among open water swimmers.

The Midmar Mile, the world’s largest competitive open water race, was held for the first time in 1973 when Arbuthnot and his two friends Dick Park and Brian Glover were unable to compete in the Buffalo Mile in East London because of petrol restrictions. They then decided to stage a race in KwaZulu-Natal.

Arbuthnot has a doppelgänger in the open water who lives on the other side of the world: Jim Cotton of Oahu, Hawaii.

In addition to establishing the 3.8 km Waikiki Roughwater Swim, the 85-year-old Cotton also co-founded the Maui Channel Swim and Waikiki Swim Club where he served as its first president between 1971 and 1974.

Shown above on the left with Harry Huffaker, the 85-year-old Honolulu resident finished 17th in the inaugural Waikiki Roughwater Swim in 1970 when he completed the 3.8 km course in 1 hour 18 minutes 30 seconds. This year, he finished the 49th annual race in 2 hours 46 minutes 48 seconds, nearly 50 years after his initial vision.

Behind the wake of Arbuthnot and Cotton, the Waikiki Roughwater Swim has many other long-time participants:

49-year-old Alex Kostich completed his 26th consecutive race, finishing 10th overall in 47 minutes 14 seconds. If he continues traveling to Honolulu every year until the age of Arbuthnot and Cotton, he will compete in his 62nd consecutive race. “I certainly would not bet against Alex,” said Steven Munatones. “I can easily imagine Alex still swimming the 2.4-mile course in the year 2057 – and beyond. He is that superhuman like Arbuthnot and Cotton.”