Dori Miller Swimming Around The World 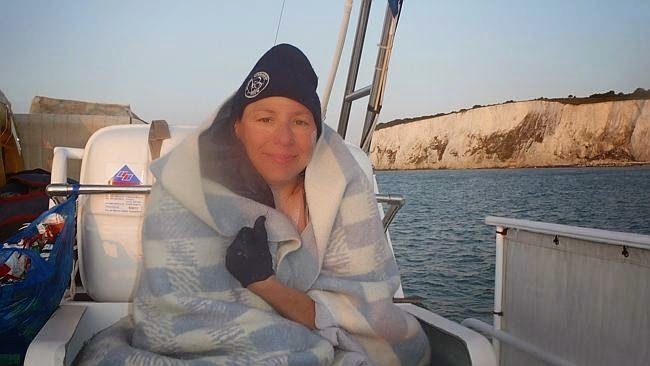 Dori Miller, originally from Connecticut on America’s East Coast, has been living in Sydney, Australia for the past 5 years. The 44-year-old former competitive swimmer for the University of Maryland did first marathon swim in Boston and eventually found her [two-]way in the English Channel.

After completing a two-way crossing in 26 hours 21 minutes on her third attempt, she is now in Australia enjoying another aspect of open water swimming.

This is her short story:

Daily News of Open Water Swimming: You swam at Maryland. Did you swim between 1992 and 2006?
Dori Miller: I swam breaststroke and individual at Maryland between 1988 and 1992. I did some distance freestyle [during] my last year. Sadly, Maryland does not have a swimming program anymore.

Daily News of Open Water Swimming: What prompted you to enter the Boston Light Swim?
Dori Miller: After I finished my college swimming, I retired from swimming for 11 years. In 2004, I started doing triathlons and went back to Masters swimming. I entered the Boston Light Swim as part of my training for Ironman Wisconsin. I had never swim 8 miles before or in cold water. Turned out I liked marathon swimming more than I did triathlons. After the Ironman, I was looking for another challenge. I dropped the running and cycling and stuck with the swimming. I decided to take on the [English] Channel next.

Daily News of Open Water Swimming: From the Boston Light Swim in 2006, you jumped into the English Channel in 2008 and then took on doubles. What prompts you to continuously up the ante?
Dori Miller: I like challenges and I like to have goals to keep me going. I’ve also found that I have perseverance and will stick with something until I’ve met the challenge. It’s not so much about upping the ante and it is about finding new challenges that will keep me interested and take me to new places.

Daily News of Open Water Swimming: Now that you have completed a two-way, what is next?
Dori Miller: For the next few months I’ll be working on my bodysurfing skills. I wouldn’t rule out another English Channel swim. I find it a fascinating swim that offers different challenges each time. I’d also like to explore other swims around Australia.

Daily News of Open Water Swimming: What could possibly trump a two-way?
Dori Miller: To be honest, I don’t know if there is anything else that will trump the 2-way for me. I’m definitely not attempting the 3-way. It was a long journey to finish the 2-way which made it even more rewarding. It was also a relief.

But, there are other things out there that I want to do. Since moving to Australia I have discovered a whole new world of ocean swimming. I have been competing in surf lifesaving which has greatly improved my surf swimming skills. I was quite proud of my first gold medals at Aussies and the 4 world records in Pool rescue. Those races had their own journeys and while they aren’t on the same level as the channel, they were just as memorable.

I don’t look at whatever is next as a way to trump the 2-way. It’s a new journey and experience worth having.

Daily News of Open Water Swimming: Have you incurred any injuries or other unanticipated obstacles along the way?
Dori Miller: When I was swimming at Maryland I broke and dislocated my wrist during a soccer game over winter training camp. I missed the championships that year.

During the Lake George Marathon Swim in 2007, I suffered a shoulder injury. I ended up with bursitis in my right shoulder and had to take 3 months off from swimming. My shoulder was still bothering my on my first 2-way attempt. I decided to stop 3 hours into the second leg to avoid damage. But since then my shoulder has been fine.