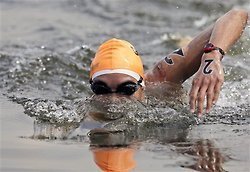 It is not allowed in the English Channel or Catalina Channel, but it is occasionally done elsewhere in the open water swimming world from the Olympics to local beach swims.

Double capping that is.

Double capping is the practice of open water swimmers and triathletes to simultaneously use two swim caps on their head in order to solve a variety of potential issues in a race or during training:

(1) secure their goggles on their head by sandwiching the goggle straps between the two pairs of caps, (b) improve heat retention through their head especially if a bubble cap or neoprene cap is used, (c) place a required race cap on their head over their favorite swim cap, and/or (d) ensure that at least one swim cap stays on their head during the swim.

Double capping can include a silicon cap over a latex cap, a bubble cap over silicon, a neoprene cap over a cloth cap, or any other possible combination of the myriad types of swim caps.