Doubling Up In Hong Kong 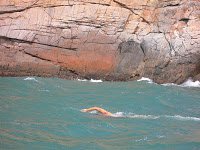 As a complementary race to the 14.5 km Clean Half Extreme Marathon Swim held in October in Hong Kong, race director Doug Woodring started the 15 km Cold Half in February when the water temperature drops.

This year, in order to make the travel to Hong Kong even more enticing for international swimmers, he is adding The Five, a new 5 km race on October 20th, one week after the Clean Half. Getting in 20 km ‘double’ over a one-week period sounds good for those interested in traveling to a different place for two swims.

It is a good ‘double’ for those traveling [from overseas]. The Five is a pier-to-pier swim, conducted on the same side of Hong Kong Island as the Clean Half.”

Then for those who are both inclined to run and to swim, Woodring is also establishing the Cold Standard extreme biathlon. “Our 15 km Cold Half marathon swim is held on Saturday, with the Standard Chartered Marathon [Run] held on the Sunday. So, if you know any athletes out there who would like to do both a 15 km cold-water swimming marathon followed by a 42 km marathon run over one endurance-filled weekend, they are very welcome to do this double on February 15-16th.

Sounds like a nice double for a endurance-oriented pair celebrating Valentine’s Day together.