Doug McConnell Getting To The Other Shore Doing Good 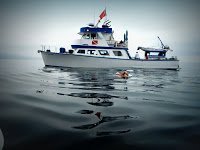 Investment banker Doug McConnell continues to step up his game in the open water swimming world.

Last week, he completed his second channel of the Oceans Seven with a 12 hour 41 minute crossing of the Catalina Channel.

His swim benefitted the Les Turner ALS Foundation of Skokie, Illinois. Known as ALS or Lou Gehrig’s Disease), the constantly creative executive borrowed the ALS acronym for the fatal neuro-muscular disease for his own open water swimming efforts under A Long Swim (www.ALongSwim.com) banner.

His success around corporate board rooms has translated to an equal success in his fundraising on his open water swims. “We have raised just about US$200,000, including a matching grant of US$50,000 last year from Medtronic of Minneapolis. Medtronic is medical device company that provided a replacement disc when I needed spinal surgery in the middle of my training.”

The 54-year-old was motivated to swim the Catalina Channel because it was such a challenge. “I train better if I know I am training for a specific challenge. After the English Channel last year, I knew it needed to be another world-class undertaking. Catalina didn’t disappoint in that regard. We were also motivated by continuing to work with the charity…and we felt like we could keep that momentum with another swim.”

He felt that his 12 hour 41 minute crossing was both fun and memorable as well as tough and painful. “I loved starting at night and swimming into the day. I was looking forward to seeing that bioluminescence you churn up with your strokes, but it never happened. I had inexplicable goggle problems, and about two-thirds of the way through, my stomach was starting to rebel against my feeding mixture. I also started getting some shoulder pain about 8,000 strokes into the swim that I didn’t really shake the whole rest of the time. It was frustrating.“

But he has luck on his side in other ways. “In terms of conditions, it simply could not have been more perfect. Gentle swells, almost no waves throughout, and absolutely flat water all morning. It was unbelievable. [International Marathon Swimming Hall of Fame inductee] John York referred to it as Lake Catalina which was pretty accurate. Lake Michigan is always choppier than the Catalina Channel was that day.”

And understanding the car culture of California, McConnell was reminded of the traffic patterns of Los Angeles. “I also loved having the kayak in the water along with the escort boat (Greg Elliott’s Bottom Scratcher). Having the kayak there made it like swimming down the lane of a freeway. I chronically swim crooked; a result from my 2010 spinal surgery and a weak left arm, so the kayak was a good governor.”

And as everyone in the Catalina Channel community knows, the morning sunrise is always a glorious time. “Another great memory was Greg Elliott welcoming the sunrise with his bagpipes. I told him, ‘I have heard about this, and have waited a year to hear these pipes. Do you take requests?’ He looked at me with a funny look, but when I asked for Scotland the Brave, he not only complied, but it brought tears to my eyes. The whole bagpipe thing is a little random, but it was a great lift after a long dark night.” 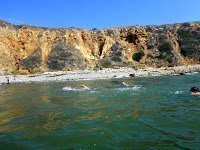 But his lift continued all the way to shore amid the legends he had supporting his effort. “The Catalina Channel Swimming Federation Observers were Mallory Mead and John York, who is an icon. We felt like we were in outstanding hands the whole time. As we approached the finish, Mallory hopped in the water to guide me onto the beach. We were joined by Forrest Nelson – another legend – in the water. To have Mallory and Forrest bring you in is a little like having Neil Armstrong and Buzz Aldrin as air traffic controllers. I was extraordinarily lucky.

My wife, Susan, who is in all respects the CEO of A Long Swim, pointed out, ‘We weren’t there to set any records; the goal was to get to the opposite shore.’ That, we accomplished; for that, we are grateful. I felt relieved, exhausted, and exhilarated when I climbed onshore. Catalina was a difficult swim for me, and I was frustrated by feeling that I hadn’t swum very well. I was glad to have it over. The finish was quite treacherous, so that added to the last minute excitement.
.”

His frustration had to do with the dynamics and uncertainty of the open water. “The distance didn’t make sense to the mathematics in my head. I am a stroke counter, and I had planned on about 30,000 strokes in a conditions-based time frame of 10 – 13 hours. The stroke count projection was based on Tampa (24 miles, 32,000 strokes) and the English Channel (21 miles across, traveled 32 miles, 40,538 strokes). For Catalina, I was way ‘overbudget’ with 36,719 strokes, and despite the perfect, millpond conditions my time of 12 hours 41 minutes was two hours longer than I had expected. As it turned out, there was evidence of some currents during the swim, which begins to explain these differences.

I chalk it up to some of the uncontrollable variables that attracted us to open water swimming in the first place
.”