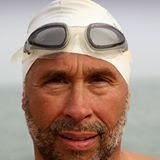 There will be few people swimming around Manhattan Island with more eyes on them than Douglas McConnell, Managing Director of Vissant Capital Corporation.

McConnell will start at 7:50 am (New York time) on June 28th and expects to finish around 5 pm.

LandAirSea has provided a GPS device that emits a signal, like SPOT, but does so every ten seconds. In addition, the most recent location is placed on a Google satellite map that will show actual buildings that we are near, practically in real time. Unlike the SPOT, it won’t show our line of progress, but it will show the current scenery from the perspective of the swimmer and the crew. There is a Login button. The login is alongswim and the password is doug. In addition, an app called Silvercloud can be downloaded to a smartphone, and the login and password are the same
.”

Besides McConnell who is swimming on his last leg of the Triple Crown of Open Water Swimming, 22 others are swimming Manhattan Island Marathon Swimming. “This is a very competitive group, whose ages range from 16 to 62, so I will be lucky to be in the middle of the pack. The 23 swimmers include 6 women and 17 men who represent 9 states and 9 countries. People are flying in from places like Finland, Spain, Italy and Australia.”

McConnell is preparing like other world-class athletes. “In terms of our training schedule in recent days, I have been going through what the endurance sports world calls a taper. The nature of swimming is that you spend virtually the whole year being fatigued. It is the kind of fatigue that is with you always, and you just ache all the time. You have to remind yourself that you’re in pretty good shape aerobically. My resting heart rate is a little under 50 beats per minute, but the muscle soreness follows you around like an old friend. Just this evening, I got a cramp in one of my hamstrings sitting at dinner. It is not like it was when I was swimming in college; recovery time and technique at age 56 is something you have to take pretty seriously.

At the end of a long season, then, everyone looks forward to taper time, which is when the time and distance spent swimming will reduce steadily in anticipation of the Manhattan swim. The theory is that, after an extended period of a heavy swimming workload, a gradual tapering of that workload will provide rest to exhausted muscles and summon peak performance for a given event. It is a great theory, but the execution of a good taper is more art than science. I have learned over the years that my physiology is such that I take a long time for me to rest, so I have devoted more than two weeks to the process.

The funny thing about a taper is that, at first, you feel horrible. Don Sammons, our coach at Illinois, explained it to me once that, just like at the beginning of the season when the build-up in yardage requires that your body change to accommodate the workload, the decline in the workload at the end of the season requires your body to respond, too. The best part of the taper is toward the end, when your new-found strength is so overwhelming that you feel strong and indestructible. ‘Powerful beyond measure,’ Don used to say.

The best telltale of whether the taper has worked, though, is a feeling that is unmistakable but difficult to describe. It gets to the point that moving through the water feels so effortless that you have the sensation that you are actually swimming downhill, as though your body is moving with a force that you didn’t cause, and that your arms have to spin faster just to keep up with the speed of your body through the water.

It has been a long season. It was a cold winter. Taper only comes once a year for marathon swimmers. Only five days separate us from the MIMS swim, and I long to feel like I am swimming downhill again.

It is at times like these, with 36 hours before we start another world-class swim, that I am overwhelmed with feelings of gratitude and humility. I am so grateful for all of my teammates who have played such indispensable roles in getting us to the starting line, none of whom ask for anything in return. I am grateful for good health that makes it possible to consider a 28.5-mile swim in the first place. I am grateful for what appear will be good conditions that will make it so that perhaps these rivers will let someone swim around them

McConnell is swimming for a cause that has been spectacularly successful: A Long Swim. He has raised over US$200,000 for the Les Turner ALS Foundation.