Based on the series and other criteria, the swimmers are working towards a selection to the Fiji Open Water Swim Team that will participate in the 2011 Pacific Games. 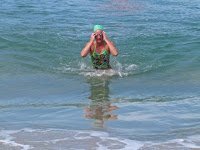 Lucy Joyce (shown on left) won the 2.5K with Emily Maybin second and Iris Pene third in the women’s race. Alex Kiechle, Sean Chow and Finn Eden went 1-2-3 in the men’s race as the local contingent of age-group teams came out in full force. 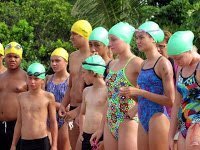 The Fiji Ocean Swim Series schedule is as follows: