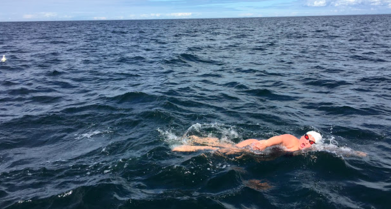 Dr. Caroline Block won the inaugural MSF Monahan Award that recognizes an outstanding and original series of marathon swims achieved over the past four years.

The four years have been a whirlwind of activity for the anthropologist from New York.

Dr. Block is shown on left swimming across the North Channel from Northern Ireland to Scotland in 14 hours 31 minutes.