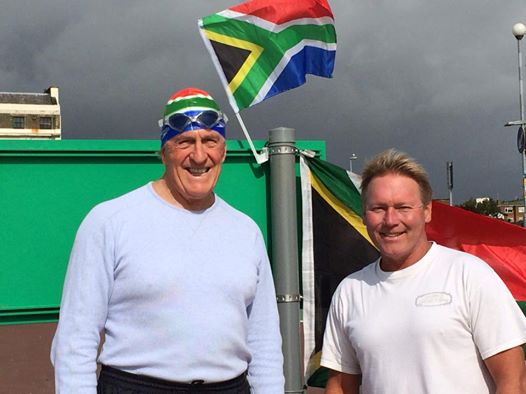 Courtesy of Dr Otto Thaning of South Africa, the oldest individual to swim across the English Channel, together with his second Roger Finch in Dover, England.

Dr. Thaning talks about the end of his English Channel swim, completed at the age of 73. “We ended the swim at about 11 pm in the pitch dark. In preparation for the landing, [escort pilot] Mike Oram shouted to me that he was going were going to ‘put up a searchlight’ to guide me to the beach. I never heard the word ‘searchlight’ and assumed that Mike was going to launch a dingy or rubber duck for the purpose of guiding me to the beach.

I realized what was happening only once I saw the massive light being attached to the mast of Sea Farer 11. Roger Finch then got in to swim with me for the final few hundred meters, down the beam of that massive searchlight. It was only when I finally saw the sand below me that I realized we were actually going to make it – and I stood up to the whoops and shouts of joy from everyone. As I staggered on to the beach, I looked up to see what we were going to walk on and suddenly saw 2 penguins walking away from us on the beach.

In total disbelief, I asked Roger whether he also saw the penguins – because there they were as clear to me as was the beach. There are no penguins in France. Roger did not reply and just continued to laugh and shout encouragement as we moved onto the beach. I was getting concerned that I was hallucinating – but the penguins were there – shuffling away from us very clearly.

Then the penny finally dropped.

I was looking at our silhouettes projected as shadows onto the beach by the searchlight behind us – perfect replicas of penguins. To confirm my deduction, I raised both my arms only to be greeted by my ‘penguin’ on the left that also raised its arms in confirmation. What a giggle and what exhilaration 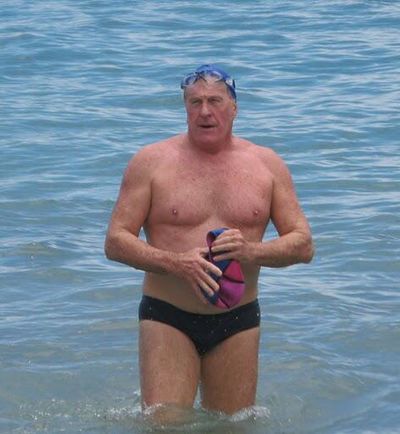 Dr Otto Thaning, a heart surgeon at Blain Communications in Cape Town, was the oldest individual in history, at the age of 73, to swim the English Channel. He talks about his preparation for the 12 hour 52 minute crossing in September 2014:

“For me, the challenge became a project because as have a passion and interest in the concept of managed and active aging. I believe that it is possible to age well and maintain health especially in later life by protecting the cardiovascular system. The basic principles being to take care by minimizing risk factors and maximizing exercise and good nutrition.

I remain fully active in my practice as a Cardiac Surgeon in a hospital that bears the name of Christiaan Barnard, the South African who did the first human heart transplant in 1967. I trained in his unit during the last 10 years of his surgical career, and then entered private practice in 1984.

My interest in swimming started at an early age, primarily because I was a poor runner and enjoyed competing in sport. I swam at provincial level (State) until I graduated but remained active subsequently in open water swimming, once I moved to Cape Town. That constituted a challenge for me as the sea here, in Cape Town, is traditionally cold throughout the year, (12°C to 15°C).

The temptation to do it again grew as I felt it would be a good thing to promote my concepts of active aging especially if there could be more people over the age of 70, successfully tackling the English Channel.

It was a 4-year project for me with accent on the following 3 components:

STROKE:
I believe stroke technique has to be perfect and comfortable in tackling a swim that should last about 15 hours. I concentrate on a slow cadence and make every effort to be efficient underwater, maintaining a high elbow throughout the arm cycle.

I have never been a great believer in huge mileage in training. I believe in consistency and high quality swim sessions, and usually aim for 15 to 30 kilometers per week. Most of this would be pool swimming, but with regular cold swim exposures. The cold exposure would either be a Robben Island crossing, or a swim in a great 50-meter pool we have in Sea Point Cape Town. This pool is unique as it starts the year (in January, our mid summer), quite warm at over 20°C, but by July it’s a challenge at 12°C. That gradual fall in temperature is the ideal way to train for the concept of becoming cold adapted.

COLD ADAPTATION:
This is the key to a Channel swim. It’s a long story, but in summary it is the ability to prevent getting cold in a long swim rather than learning to be cold.

This subtle concept is fundamental in the understanding that our core temperature is regulated at 37°C. All our physiology functions optimally at that temperature. Muscles, liver metabolism and all our neurological functions become compromised if the core temperature drops into the hypothermic zone (below 35°C).

Thus the adaptation training is one that minimizes heat loss and maximizes heat-generating metabolism, and the aim is to maintain a near to normal core temperature throughout the swim – even if it takes 15+ hours,

Heat loss in swimming in cold water is mainly by conduction. Wherever there is a temperature difference between the exposed parts of the swimmers body and the water, heat is lost from the warmer skin to the colder water.

This heat loss can thus be reduced by increased body fat which acts as insulation. I believe that the percentage body fat is important and needs to be more rather than less. A better measure of adequate body make-up for an English Channel swim is the Body Mass Index: Weight in kg divided by the square of the height in meters. Ideally, I believe the BMI needs to be above 15 and less than 25 for normal health. Obesity is defined as a BMI in excess of 25. Channel swimmers should aim for a BMI that is 25 to 30. So Channel Swimmers are medically is defined as obese. They are healthy though, because they are physically very well-trained athletes and have good nutrition.

However, heat loss can be further minimized by early adaptation mechanisms that selectively reduce the peripheral circulation to the skin. This allows less heat loss by conduction as the superficial skin temperature rapidly equates to the water temperature, and as the skin circulation is reduced conduction heat loss is less, and the core temperature is protected. If these adaptive mechanisms are initiated EARLY, that is before the core temperature starts to fall; the length of time that a swimmer can tolerate a cold swim will be increased. This phenomenon can be achieved by training.

The training program to achieve this is aimed to make the Autonomic Nervous System (ANS) more reactive, or to maintain the flexibility of the ANS that is a feature of youth. The method of training is by increasing periods (swimming time) in water with progressively lower temperatures, over a long period of time. Hence the great opportunity the Sea Point pool gives for aspirant Channel Swimmers who start in January in warm conditions and reach really cold conditions by July – just perfectly timed to take on the English Channel swimming season. Cold adaptation is an acquired essential component of a successful Channel swim. It comes after many months of painful cold swimming. This repetitive challenge to the ANS is a very good method of attempting it to retain the characteristics of the ANS in the young. It is my take on one of the methods to promote ‘active aging’, or aging well. The other arm of the equation is heat gain. This is a function of increased metabolic rate and is also acquired by training. It’s a function of burning energy stores at a high rate and also entails the ability to use fat stores early in any endurance challenge. Thus the concept of Fat Adaptation:

FAT ADAPTATION:
The calorie requirements for an EC swim are huge. The requirement is greater than what is possible to consume and absorb during the swim. The other challenge is that the carbohydrate stores that we have in our bodies are limited to about 500 grams, and this is in the form of Glycogen. Normally carbohydrates are the initial source for energy in any sporting event.

On average, a normal adult has over 20 kilograms of fat available for energy. We don’t usually use fat for our initial energy requirement as our diet (Western) is massively – and in my opinion – unhealthily biased towards a carbohydrate intake. Thus it is a given that fat would be a better source of energy in any long event requiring a high caloric consumption. Primarily because we have more of it and it is a more efficient source of calories than carbohydrates (weight for weight). The ability to keto-adapt makes the energy available in our fat stores an obvious primary option, and it thus makes it possible to utilize fat for energy ab initio and not as an ‘emergency’ physiological switch that normally would occur at about 5 hours of high level exercise. This switch is commonly referred to as “Hitting the Wall” by ultra Ironman triathletes who often experience it at about the half way mark of an Ultra Ironman event.

So much has been recently written about this concept of ‘teaching’ the body to primarily use fat stores for energy. The concept has been written about in many books: Gary Taubes in Good Calories, Bad Calories: Fats, Carbs, and the Controversial Science of Diet and Health (published as The Diet Delusion in the United Kingdom and Australia) or see Peter Attia at the Eating Academy, or Tim Noakes in The real meal revolution.

The concept falls under adopting the Banting diet, or the Paleo diet or a number of other descriptive synonyms that define the idea of a Low Carb High Protein and Fat diet. The conversion to ketosis has to be well in advance of the swim challenge and I have maintained it since keeping my weight stable at 95 kilograms, which is just below my weight when I swam the English Channel in 2014. I am 1.87 meters tall.

I aggressively undertook this ‘conversion’ and promptly lost about 12 kilograms during the 8-month period before my Channel swim last year – in September 2014, my weight was 97 kilograms at the start of the swim, and 96 kilograms at the end. I lost only 1 kilogram during the swim, which is far less than the usually expected loss in this swim. 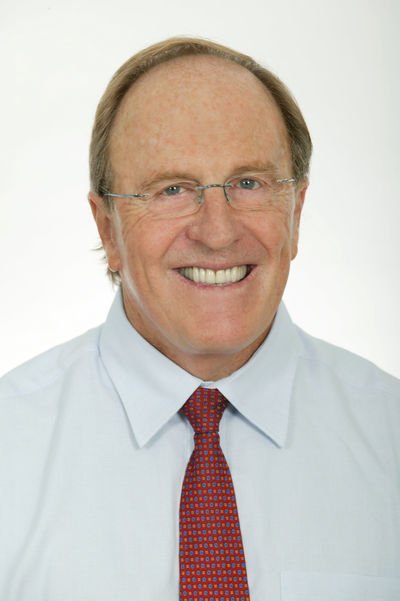 This experience was particularly relevant for me as we, as Cardiac Practitioners, usually try to advise the importance of a low fat diet to our patients who have significant vascular disease. Our aim used to be to attempt to get our patients to lower their cholesterol by reducing the fat intake in their diets!

My whole drive is now advising my patients to change to a LCHF diet and the surprising thing is that on this diet the serum lipogram actually improves.

In my swim, I hedged my feeding plan a bit by using a maltodextrose diluted feed every half hour supplemented by a big feed of double fat yogurt with about 200 ml of Coconut Cream. This was taken every 3 hours. At the end of the swim I had lots of reserve and felt amazingly energized and good. The swim was almost exactly 20 years after my first crossing, and my time just under 20% longer than the earlier one in 1994, for the crossing.