The Drama Of Winter Swimming 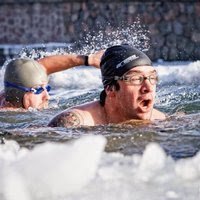 Jack Bright‘s documentary, Winter Swimming, is fascinating look at the niche world of extreme swimming where freezing is a given reality.

Jack’s narration is the ideal overlay on the visual world of snow and ice that he presents from the Czech Republic.

The explanations and descriptions of the winter swimmers are helpful and educational, but not overbearing or exaggerating in the least. The voice enhances the visual images and drama that embodies every scene of the film.


The camerawork and narration allows audiences to soak up in the ambiance of winter swimming where the abnormal is taken as normal and natural. The drama is presented by even-keeled voices of reason of swimmers from every walk of life.

The scenes largely are shot in 4°C with air temperatures even lower. The background of swimmers without neoprene and in simple swimsuits is amplified by observers in the background with heavy jackets, boots and fur hats. Jack shows the build-up and the post-race activities of the athletes who participate in the 62nd annual hosting of the winter swimming event in Christmas.

He explains the history of the sport since the time of ancient Greece when the Hippocrates advocated entering into cold water for the cure of many ailments. Amid the starkness of winter in scene after scene of a blanket of white and flowing frigid water, he touches upon the physiological and psychological benefits through short statements and powerful imagery of winter swimmers.

Winter swimming is a great documentary that allows viewers to soak up in – and get inspired by – the world of ice swimming.