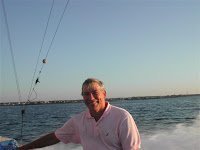 Diana Nyad does it. Hundreds of channel swimmers do it every year from Hawaii to Dover. And so did Jim Bayles of Connecticut around Block Island in 2005.

The Daily News of Open Water Swimming had previously posted dozens of dream swims around the world – swims that have not yet been done, but may be by the current or future generations of swimmers.

One swim was incorrectly included in that dream swim list: #8 Block Island to Point Judith in the state of Rhode Island on the east coast of the United States.

P.H. Mullen reported in Swimming World Magazine that Jim become the first to swim the 13 miles of cold ocean between Block Island and Point Judith.

The then-53-year-old crossed in 5 hours and 4 minute. A member of the exclusive Half Century Club, his Block Island swim is now noted in the International Marathon Swimming Hall of Fame online archives.

“The seas were perfect. I only swallowed seawater twice, and then it wasn’t all that much. I landed directly below the lighthouse and felt elated. The swim went off almost perfectly from start to finish. I feel extremely fortunate to be able to continue to support this most worthy cause of the Epilepsy Foundation. It was not a hard swim, but logistically it was an intriguing one.”

Jim has done a number of unprecedented swims, all done for charity and in honor of his daughter who suffers from epilepsy, including a risky swim (facing sharks) across the Pollack Rip Channel between Cape Cod and Nantucket Island in Massachusetts.

We expect a lot more dream swims from Jim in the future.