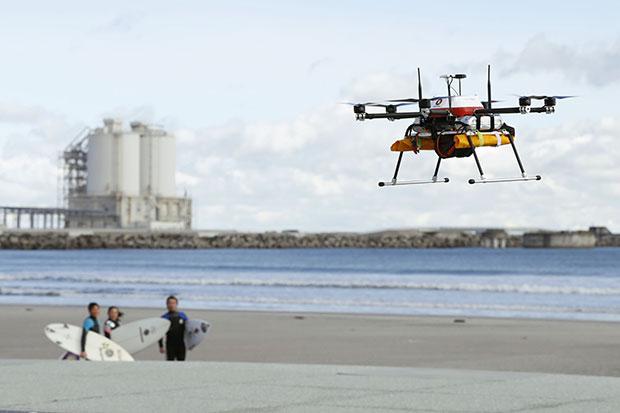 In the second half of Penny Palfrey‘s 109 km (68-mile) swim from Little Cayman to Grand Cayman that took 40 hours 41 minutes in 2011, a helicopter delivered a tub of chocolate ice cream to her escort boat, the Carib Princess.

The cold chocolate ice cream was a welcomed relief in the warm tropical water that was eating away at Palrey’s soft tissue in and around her mouth.

It was difficult, if not impossible, for the then 49-year-old to eat or chew anything solid. So, under the directive of her sponsor Frank Flowers, a tub of local chocolate ice cream was delivered in the middle of the Caribbean Sea.

“The ice cream seemed to really help her get her second wind,” recalled Steven Munatones. “She asked for it and Mr. Flower literally delivered in a major way.”

In the future, it may not be necessary to request for a human pilot and a helicopter to deliver goods on long swims.

In Japan, a drone successfully delivered hot soup to a group of surfers in a test of an unmanned flying vehicle traveling a preset route of more than 10 km. The test was conducted by Japan’s Industry Ministry, the local Fukushima prefectural government, and the Autonomous Control System Laboratory headed by Kenzo Nonami, a leading drone system developer in Japan.

The drone took 15 minutes to make the delivery by traveling from the Fukushima Hama-Dori Robot Testing Zone to Kitaizumi, a popular surfing spot north of Tokyo.

The primary purpose was to determine if such a delivery system is possible for use during post-disaster relief activities. With tsunamis and earthquakes occurring in Japan, this is a humanitarian need that can be uniquely addressed with drones and robots. The local government officials are inviting robot- and drone-related businesses to take part in these invaluable efforts.

“With all the new technologies coming out of Japan right now, I am really looking forward to what will be unveiled between now and the 2020 Tokyo Olympics,” remarked Munatones.