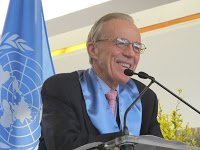 Drury Gallagher, one of the giants of pool masters swimming and marathon swimming, was honored with the Irving Davids – Captain Roger Wheeler Award yesterday at the International Swimming Hall of Fame ceremonies.

But Gallagher, true to his humble roots and his propensity to elevate others, gave praise to his colleague and co-founder of the Manhattan Island Swimming Association, Tom Hetzel during his acceptance speech.

Hetzel passed away last October at the age of 75 with a heart attack, prompting Gallagher to remind the crowd gathered in Fort Lauderdale about the marathon man with a huge heart and deep passion for the sport of open water swimming. “Tommy touched the hearts of many. He and I grew up on the shores of the Atlantic Ocean in Rockaway Beach, New York. We had the same teacher and mentor, Joseph Ruddy: a legend, Olympian swimmer and water polo player and member of the International Swimming Hall of Fame. Were it not for Tom, there would be no Manhattan Island Marathon Swim.

He was the author of a highly popular marathon swimming book, Conquest of the English Channel, whose legacy was remembered by many. Joshua Ruiz said of him, “Tom was an astonishingly humble man and a true American legend. He has left behind God’s heavenly bodies of water in exchange for his wings in the sky.”

Dale Petranech, Honorary Secretary of the International Marathon Swimming Hall of Fame, commented, “We will all miss our friend and fellow swimmer. He made great contributions to marathon swimming. I am sure that we cannot list and appreciate everything that Tommy has accomplished. His eight times across the English Channel and his coaching of several channel swimmers, including coaching great Doc Counsilman, is but a part of his legacy. It is truly a sad day, we will all miss this giant in marathon swimming.”

Channel Swimming Association President Michael Read remembers, “The Board and members of the Channel Swimming Association have learned with much sadness of the death of Tom Hetzel. A frequent and most popular visitor to Dover in the 1970-80’s, he was the USA’s most successful Channel swimmer, succeeding on eight occasions. Not content with his own personal achievements, he turned his attentions to helping other aspiring swimmers to fulfill their dreams and he was always welcome on British shores. Sad news indeed, the world has lost one of its great characters, a real sportsman and a phenomenal swimmer, who will always be remembered with great affection amongst his Channel swimming friends.”

12-time English Channel swimmer Marcy MacDonald shares her memories, “Tom was a great inspiration to us all. When I started investigating the prospect of swimming the channel, back in 1992 (before the internet), Tom’s book helped so much, THANK YOU Tom. He will be missed. Cherish his memory, Peace to his family.”

Mike Oram, Chairman of the Channel Swimming & Piloting Federation and Channel Swimming Escort pilot, says, “I know I speak for all of us involved with English Channel swimming and the committee and members within the Federation when I say Tom will be sadly missed but happily remembered. Although I was not involved with English Channel swimming in Tom’s early swimming days, I met Tom on many occasions and had him aboard when he was accompanying and mentoring his swimmers. A great, but quiet man, who knew how to achieve and motivate. He was to the point with his methods, knew how to get the best out of his swimmers and how to get results. His participation and stories will be missed, his methods, experience and written word will live on.”

Wendy Coles of British Swimming recalls, “I have memories of Tom sitting on Dover beach looking out through the western arm and beyond. How proud he was to have conquered the channel. It was a privilege to see him work along with Doc Councilman and Lisa…and how he put together a relay team called the Texas Rangers. Great man will be missed in this vast world that is made so small by the love of open water.

The venerable Kevin Murphy talks respectfully about Tom, “As we go through life there are some people we are glad and proud to have known. For me, Tom Hetzel was one of them. I first came across Tom when I was the teenaged newbie and he was the hero Channel swimmer I was trying to emulate. Those were the days when only a handful got across every year and I was a little in awe. The trouble was, I was first in line and ahead of him in a queue of swimmers waiting to go with the redoubtable pilot, Captain Len Hutchinson. I think it would have been Tom’s second crossing but ‘Hutch’ wasn’t happy with the weather.

I eventually got away, but I held Tom up for so long he had to go home without even getting started that year. He didn’t hold it against me. He was ready with help, advice and encouragement and was very generous in his comments. That was typical of the man – a quietly spoken gentleman with a steely determined core. He was the expert – a swimmer with multiple crossings to his credit, coach, mentor and author. His legacy will live on in all those capacities. If I hadn’t held him up I have no doubt whatsoever that he would have had another Channel swim to add to his eventual list. In the days before high carbohydrate feeds or even radar on the pilot boats, he was a winner. Tom Hetzel is an integral part of the history of Channel swimming, taking it forward and moving the goalposts of achievement. For that I, and we, owe him a debt of gratitude.”

Tom Hetzel and Drury Gallagher, two winners with a wonderful legacy in the aquatics community.

Photo of Drury Gallagher by Skip Storch at the United Nations where Gallagher was honored in 2011.