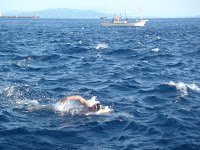 When we observed Darren Miller attack the Tsugaru Channel, it definitely was a battle between man and nature.

Mother Nature was Goliath, the heavyweight with the upper hand, while Miller was a flyweight facing an insurmountable bout.

The swells running fast from the Sea of Japan were generated from strong cross winds running perpendicular and diagonal to Miller‘s course. Every arm stroke looked like Miller was intruding into the fiefdom of Poseidon.

And Poseidon was not happy was being slapped by a human with no sign of quitting. With every stroke, Miller would punch through one side of the wave and come out the other.

Instead of riding on top of the water as he perfected as a fast collegiate sprinter, he was spending more time gasping for air between irregular swells. Up and down, left and right in completely random patterns, his strokes were cut short by walls of water crashing upon him by the angry sea. Frustration showed on his face and was clearly evident in his voice as the constant surface chop was relentless for 13 long hours in his nearly 16-hour swim.

“Talk to me,” he pleaded during one feeding stop early in the mismatch. “How much longer?”

“Relax dude. Don’t fight the waves,” observer Steven Munatones advised. “You’re going to face this for a long time. Stretch out your stroke and keep your kick up.

Your body position is great. Keep streamlined. Find your rhythm. You’re moving, despite what you might feel
.”

Slammed in a unsynchronized manner by the dynamic environment of wind, waves and currents, Miller was facing natural forces much greater than any human. The schizophrenia of the Tsugaru Channel was taking its toll on one of the leading athletes of the Oceans Seven.

But as he relaxed his stroke, he began to slip through the turbulent sea with a butter knife rather than a sledge hammer. The release of tension in his upper body was also clear as the frustration on his brow eased.

But the heavy water chop also found its way to his mouth during his feeds every 20-45 minutes.

Too much intake of the salt water would eventually lead to an upset stomach. This had to be avoided as the water was dropping in temperature from 21°C (70°F) to 16°C (61°F). With rough water and dropping temperatures, a stomach full of hydration drawn from the Tsugaru Channel and gel packs could lead to a downward vortez.

“Put your back to the waves when you drink,” Munatones suggested. “You’re less likely to suck in the waves when they are not hitting you straight on or from the side.”

And so Miller forged on. Relaxed and sheltered from the ocean water as he eventually finished in 15 hours 55 minutes with a huge smile on his face.