Duo Benefits: Being Engaged While Swimming 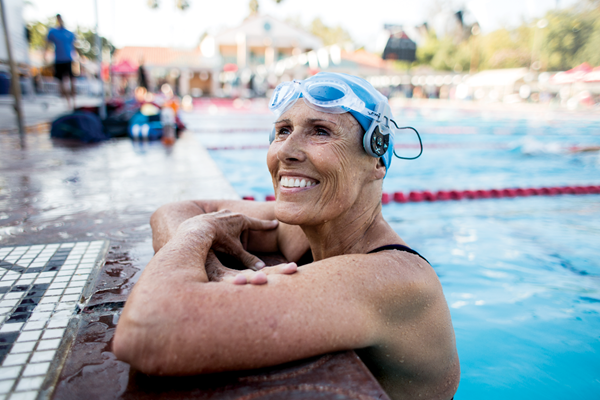 While many people are impressed with Diana Nyad‘s 52 hours 54 minutes swim from Havana, Cuba to Key West, Florida in 2013, we were most inspired by the several dozens of training swims that Nyad completed in order to prepare for her ordeal.

Swims over 10 hours, 12 hours, 16 hours, 20 hours and a handful of 24-hour training swims were completed with her escort team. These swims were in pools and in the Caribbean Sea, from Mexico to Sint Maarten.

Hour after hour, mile after mile, month after month, year after year, Nyad prepared herself physiologically and psychologically to swim 52+ hours. It was a long-term training program and passionate dedication to the sport of open water swimming that went unnoticed but was entirely required to achieve her goal.

During those long training swims, Nyad used to listen to audio books and music to keep her mind engaged as she swam at an all-day pace.

Along the way, John Mix and the staff of FINIS helped Nyad design a special swimsuit and enabled her to listen to music with their waterproof MP3 player during her training swims. Most recently, FINIS announced a new partnership with Nyad.

Nyad tells the story of singing in her head John Lennon’s ‘Imagine’ over and over again on her attempts and crossing of the Florida Strait. “I know when I sang the song 1,000 times, it’s been 9 hours and 45 minutes exactly,” describes Nyad who swam at a constant 50-52 stroke per minute pace.

“As magical as immersion in pools, lakes, and oceans can be, swimming is often also a lonely endeavor. The FINIS Duo Underwater MP3 player has brought me the delight of company. Now, The Beatles and The Rolling Stones and Katy Perry are right with me, stroke-by-stroke. With astounding clarity, their voices, their harmonies, their guitar licks, literally make me smile as I swim.”

“When you talk to Diana, you can’t help but feel inspired,” says Mix. “She has such a positive outlook on life, and she transcends not only the sport of swimming but athletics in such a beautiful way. It doesn’t matter what your dream is—she is always inspiring people to achieve their dreams.

To receive a 20% discount on the FINIS Duo Underwater MP3 player, visit FINISinc.com/duo and enter in the code diana20 at checkout.