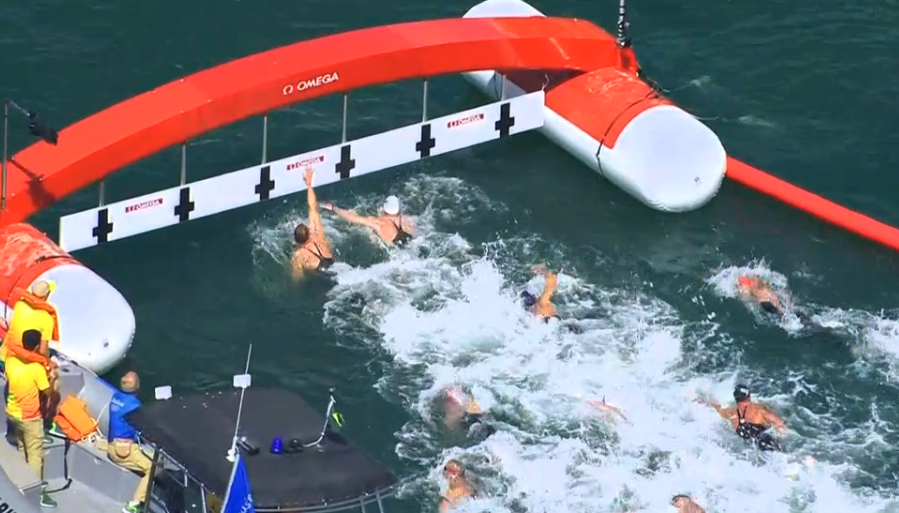 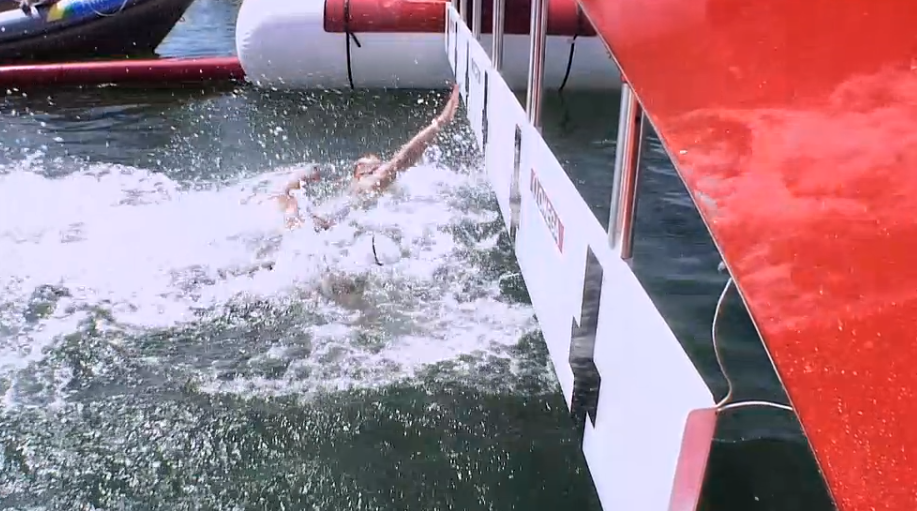 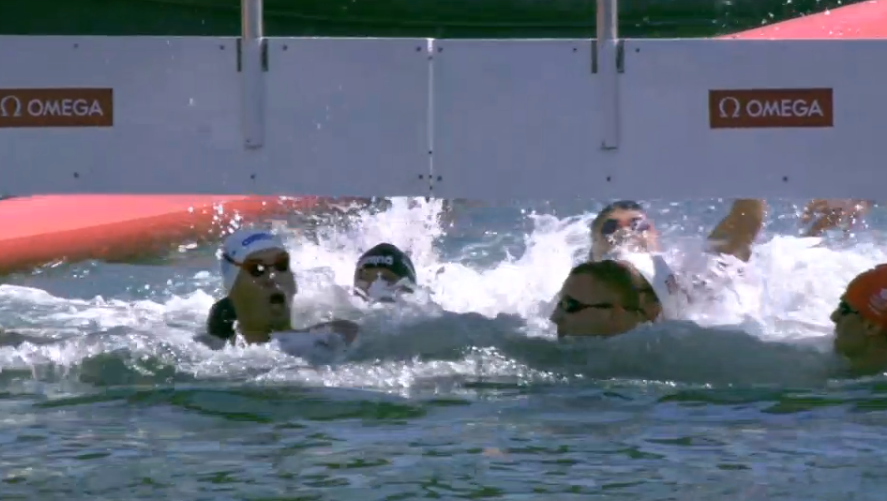 Ferry Weertman won the most dramatic race possible on Copacabana Beach as he led a chase pack to catch Australia’s Jarrod Poort on the last lap of the Olympic 10K Marathon Swim this afternoon in Rio de Janeiro.

Poort led by as much as 1 minute 15 seconds and still held onto a 45-second lead with 2 km to go, but Weertman and the rest of the trailing pack were just starting to put on their sprint. With 600 meters to go, Poort was no longer a factor in the race, but the top swimmers were in an 8-wide formation. Each of the men were strung out shoulder-to-shoulder and had an excellent shot at winning the gold medal.

But size and position matter very much in these situations and both Weertman (size) and Gianniotis (position) had the advantages. Meanwhile, American Jordan Wilimovsky and Tunisia’s Ous Mellouli were in the middle of the scrum and being boxed in while smacking their opponents – and being smacked – on each stroke.

Jordan was sprinting in his third race in the last four days. The intensity he put in the pool during his 1500m preliminary and final heats had to take something out of the defending world champion. Mellouli, meanwhile, was positioned in the worst possible position to make a move.

Canada’s Richard Weinberger summarized the race for many who ended up initially chasing Poort and then ultimately chasing Weertman and Gianniotis. “I was swimming so easy there. As the fourth lap started, there was a lot of fighting and open water tactics used by a lot of these guys that don’t cause yellow flags, don’t cause red flags. So I fell back. I was still swimming easy, still swimming strong. I just started having a little bit of breathing issues toward the end.

When there are a lot of boats [on the course], I find my throat tends to swell up. We expected that, prepared for that as best we could. Those are the conditions we deal with, and these guys are as tough as nails. I held my cool as long as I could. I was holding stroke, trying to draft off the guys I was racing with. I knew that at around 500 meters [remaining] I’d lost my chance at the podium.

48 hours before the race, a big surf comes in and sinks the pontoon. We prepared for everything and it fell off on my part

Swimming Canada open water coach Steve Price explained what he saw on the last lap. “On the back lap, that was when some of the bigger players started to go. You saw that frenzy at the end there – that’s not Richard’s strength. He’s not the biggest strongest guy and some of those guys can muscle him out.

You’ve seen the development of the sport in only four years [since London]. The pool of just getting faster and faster. He swam his guts out today but just did not have the speed at the end. It’s a grueling, grueling race
.”

Grueling for sure. Controversial for certain.

The 23-year-old said, “Officials in about 600 boats had no idea what they are doing, giving out cards left, right and center for nothing. The whole thing is a joke. I was disqualified two meters from the finish.”

During the race, the assistant referee kept on blowing warning whistles and several athletes were given yellow cards. Burnell explained his first – and mystery – yellow card to BBC. “No one was either side of me and [the referee] pulls out a yellow card. I couldn’t physically have touched anyone and I got a yellow card.

I shook my head at the guy. This is meant to be the pinnacle of our sport and there are referees who haven’t a clue what they are doing. That is how ridiculous this is. They always want to be seen to be doing something. On the Olympic stage, what do they want to do? Do they want to get on telly to show a yellow card? To show their family back home that they’re doing something? It’s absolutely ridiculous
.”

Burnell had serious issues with Mellouli. “[Mellouli] was holding my leg not for one, two, three, but for four or five strokes, so I had to turn round to try to get him off. What am I meant to do? We’re all at top speed and I’m stopped dead. I’m one of the fastest finishers in there. He was yellow carded for that, which stopped me winning, but I was disqualified for trying to get him off to try to win the race. Explain that to me.”

He has a point and an issue that needs to be addressed by FINA for the next quadrennial.

Meanwhile, 36-year-old Spyridon Gianniotis pulled slightly away from the lead pack as the group entered the finish chute. He was swimming like a man swimming for his life – and his lead appeared enough to win. But Weertman shifted into an even higher gear and timed his finish perfectly. The Dutchman hit his top speed as the duo were quickly barreling down towards the finish. The 24-year-old just barely out-touched Gianniotis in an exquisitely timed hand touch to the finish panel.

Just a few strokes back, the race for the bronze was a very tight photo finish between Marc-Antoine Daniel Frede Olivier of France and Lijun Zu of China. After some discussions with the referees, the Frenchman was awarded bronze over the emerging Chinese swimmer.

Defending world champion Jordan Wilimovsky of the USA and defending Olympic champion Ous Mellouli were in the middle of the scrum and simply could not break free to sprint as planned and medal as expected. 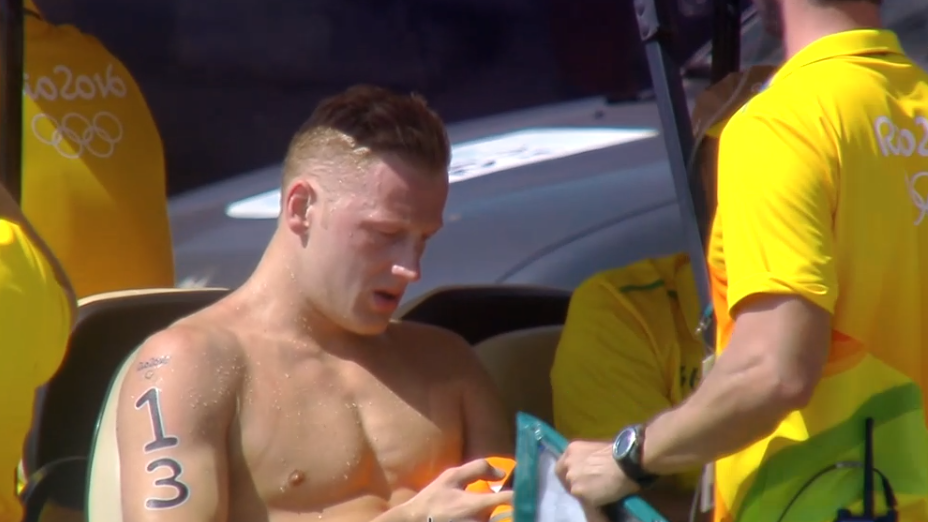 #13 Olympic champion Ferry Weertman of the Netherlands checking his phone after the race. At this point, he still had not understood that he won the race.

“It was a classic race with everything that the sport of open water swimming offers: uncertainty, stiff competition, a valiant sprint to the finish, ocean turbulence, controversy, chase groups, drafting, positioning, yellow flags, and red flags demonstrated by the efforts of a great group of open water swimming ambassadors from around the world, said Steven Munatones.

“The ambiance was great. The on-the-water footage was great. The gutsy performances were inspirational. The aerial camerawork was outstanding. NBC really gave a comprehensive mix of close-up shots and panoramic views of the course that helped tell the story as it was unfolding on Copacabana Beach. The faces of the athletes also told the story in human terms; there was joy, disappointment, and surprise. From the curious strategy of Jarrod to the ferocious sprint by Spyros, this was really a privilege and joy to watch.”

Photo of Greek leader Spyridon Gianniotis, sprinting out ahead of the lead pack and heading towards the finish chute: 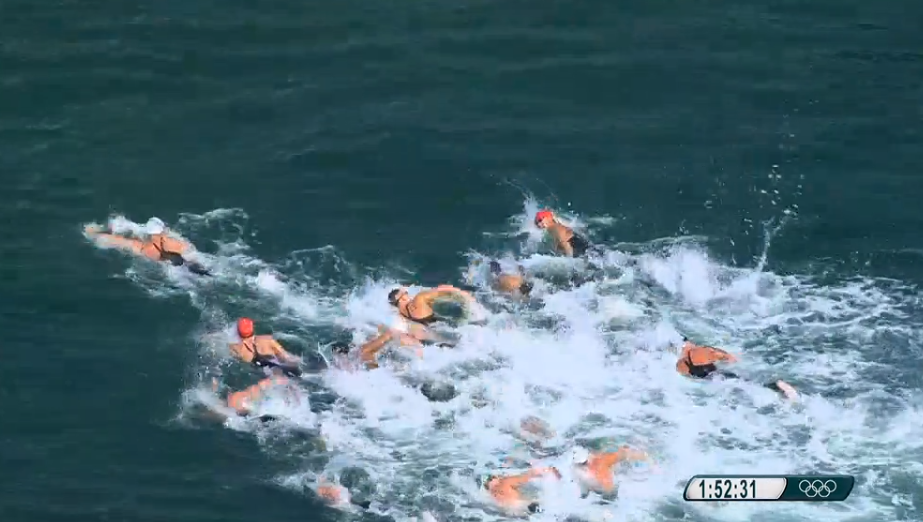 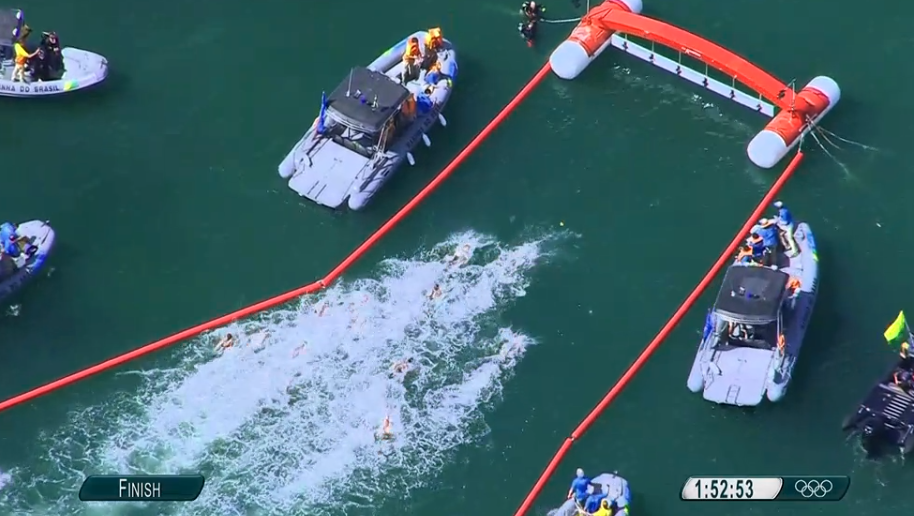 Shoulder-to-shoulder formation with less than 400 meters to go: 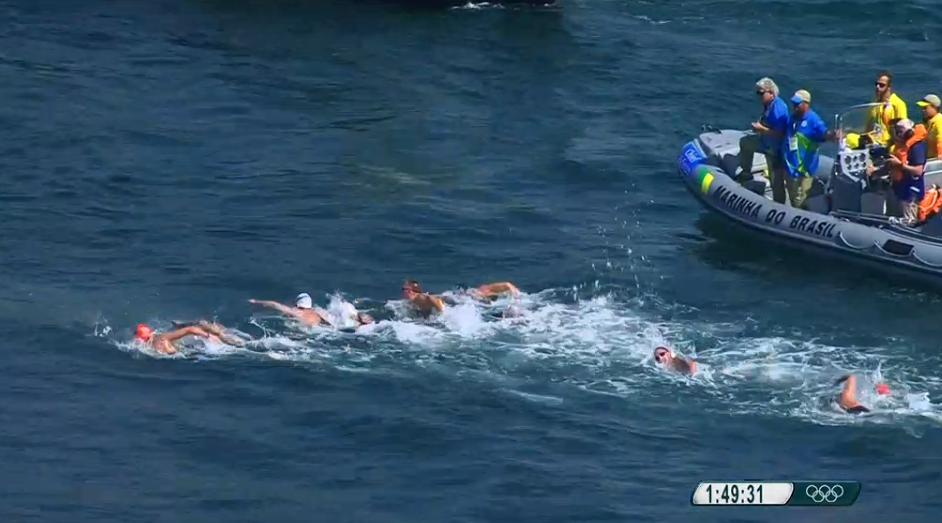 * Unlike pool swimming races at the Olympics and elsewhere, open water races are not decided by the official time. FINA-officiated races are decided by the first (or fastest) swimmers who touch the finish panel. For example, a swimmer can swim past the vertical plane of the touch panel, but if the swimmer has not yet touched the finish panel, they are not officially finished. Therefore, the times are only an indication – but not the determination – of the actual official placing.

Therefore, Weertman and Gianniotis were given the same time of 1:52:59.8, but Weertman was judged to hit the finish panel first. Therefore, he was given the gold medal.

Similarly, Olivier and Zu were given the same time of 1:53:02.0, but the Frenchman was judged via the high-speed cameras to have touched the final panel first, so he was given the bronze medal.

For additional photos and articles on today’s exciting race, read the following:

* I Had A Perfect Finish At The Olympics
* No Thank You, We Are On A Chase
* Ferry Weertman In Lead Now
* Aussie, Aussie, Aussie, Oi! Oi! Oi! Chase Is On
* Is Poort Pulling A Bircher?
* Expect The Unexpected In The Men’s Olympic 10K
* 24 Men Chasing Jarrod Poort
* Jarrod Poort Takes Off On A Risky Strategy In 10K
* Age Analysis Of Olympic Open Water Swimmers

And for a pre-race prediction of how Weertman would perform at the Olympics, read here.