Early Season Triumphs In The Channel 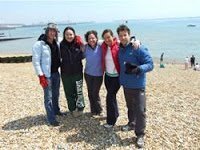 On June 21st, the Team of Worth, piloted by Neil Streeter, in 13:13 made an early-season success. On June 25th, the Mile High Channel Hoppers, piloted by Eddie Spelling, was also successful in 10:48 as was the Nuriwai Relay, piloted by Lance Oram, in 13:07 on June 30th.