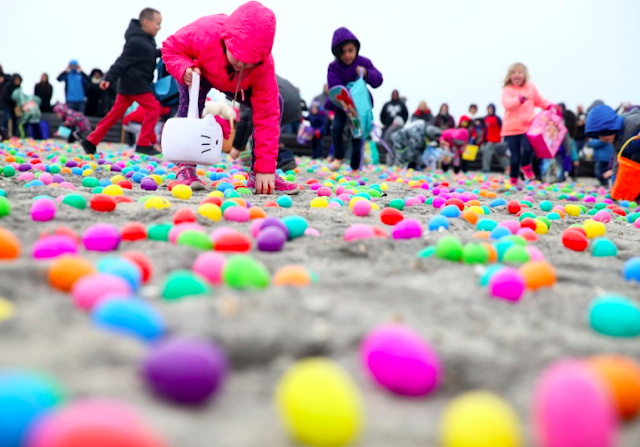 Since 2018, New Jersey’s Ocean City beaches have been hosting their annual Great Egg Hunt for children ages 7 and under. Kids and their families line up behind the roped off area, eagerly waiting to be unleashed when time is called to collect as many candy-filled eggs as they can get their hands on. While this activity is a fun way for children to spend their Easter, it is potentially harming the delicate marine ecosystem.

The article quotes, “All you nature lovers out there, don’t worry: no eggs were left behind.” We ask, “Are young children – or their parents – responsible enough to clean the beach up after themselves? What really happens to all of the leftover eggs?“

The unfortunate outcome is that many plastic eggs, candy wrappers, and other trash left behind in the sand are swept into the Atlantic Ocean come high tide. From the perspective of the young Easter Egg hunters, even though it may seem as if the beach has been cleared of all plastic eggs, there is no telling how many have been buried in the sand or eventually made their way into the ocean.

The ocean has been nicknamed a ‘plastic soup’ by Renee Cho of Columbia University. That’s right; there is predicted to be more trash than fish in the ocean by 2050. Already a problem of its own, children’s trash like these plastic eggs will only add to the growing concern. Not only that, but according to the Center for Biological Diversity, there are approximately 15-51 trillion pieces of trash in the ocean – and, sadly, not a single square mile of the ocean remains plastic free.

Projects and organizations who have made it their mission to conduct ocean clean-ups have only made a small dent in this large-scale problem.

Plastic in the ocean takes roughly 450 years to break down with help from the sun’s UV rays, but there’s no telling how long it may actually remain intact as it floats around in the ocean. As the mass of pieces of plastic get smaller and smaller, they become harder for humans to extract in ocean clean-ups. But before it even reaches that point, it could be consumed by an unsuspecting fish or seagull mistaking it for food. The possible outcomes of just a small plastic Easter egg entering the ocean are infinite.

Plastic Easter eggs are made out of plastic #1 called Polyethylene Terephthalate (or PET for short). This is the same type of plastic that water bottles, salad dressing bottles, and jars of peanut butter are made from. When in contact with water, PET plastic leaches toxic chemicals into the water that are harmful to marine wildlife. PET plastic has even been proven to cause health issues in humans, such as interfering with estrogen or other reproductive hormones.

Not only is the plastic that makes up Easter eggs harmful for the environment, but so is the candy inside of them. Sticky candy such as jellybeans, gum drops, gummy bears, and even things as small as M&Ms could be harmful to a seagull who happens to mistake it for food. These candies could get stuck in the delicate network of their esophagus or intestines. Chocolate is also poisonous to animals, resulting in damage to an aquatic bird or other animal that consume it.

A solution to these problems is to move the entire event to a nearby park, or even better, indoors. The real question here is are fun events such like this one worth risking the ocean’s cleanliness?

Sources:
* 7 Types of Plastic and What They Mean to Your Health
* Kids can search the beach for 100,000 Easter eggs
* More than 50,000 Easter eggs collected in minutes at this N.J. beach (PHOTOS)
* PET bottles potential health hazard
* Our Oceans: A Plastic Soup
* OCEAN PLASTICS POLLUTION. A Global Tragedy for Our Oceans and Sea Life