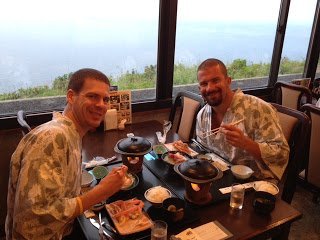 We have always wondered, especially after we polish off a pancake-eggs-juice-yogurt-orange-sausage-muffin breakfast, why we feel so hungry after swimming in the open water.

If the water is warm or cold, rough or calm, no matter what speed or distance when we swim, we get hungry. It is inevitable.

However, when we review literature about caloric burn from swimming, reporters usually write that swimming burns fewer calories than running or cycling.

While we understand magazine writers focus on the average fitness swimmer and know little about the training habits of competitive open water swimmers, we think the caloric burn estimates from nutritionists is too low. Even if we are totally wrong, these estimates are certainly much lower than our own personal experiences.

If we do a 90-minute pool workout with intervals or simply cruise in the ocean at a leisurely pace or even body surfing for 30 minutes, we always feel famished. Why and how does the water do this?

We run and we perspire. We do cross-training and build up lactic acid. But when we swim, we eat. A lot. Is this unusual? Is it normal?

The media made a big fuss over Michael Phelp‘s eating habits. When he trained, Phelps was able to wolf down 12,000 calories per day and maintain six-pack abs. While we don’t have 6-pack abs, we do find ourselves eating more than normal after we swim. Or perhaps it is just a commonality between the world’s greatest swimmer and ourselves?

Perhaps it is related to the fact that when we run and our body temperature rises, this may result in a sort of anti-hunger mechanism? As Professor Tim Noakes of the Sports Science Institute and the University of Cape Town says, “The fall in core body temperature due to swimming might logically stimulate an inevitable eating behaviour as an evolutionarily-valuable response. That is, seek food if your body temperature is dropping since feeding will raise your body temperature. To test this – get in a hot bath after the swim and see if it takes the edge of your hunger as your body heats up.”

Darren Miller, an Oceans Seven swimmer, explains of his response, “I can honestly say I have never been more hungry than after a long, tough swim. A difficult swimming workout will always trump a difficult cycle, or trail run. Although I am not as versed in the science behind that statement, I have always listened to my body and it tells me the same as it tells you – swimming is burning off the highest output of energy, thereby giving your body the desire to eat everything in sight.”

Pat Gallant-Charette describes a delayed response of sorts, “After a workout type swim, I am not starving, and I can wait an hour or two. But after an event like a channel swim or training for 2+ hours? I am famished after the training swim, but on long swims, it is the second day that real hunger kicks in.”

Photo shows Darren Miller eating with his brother after a workout in Japan.