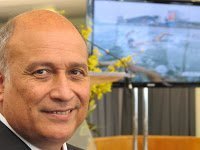 And so will Ecuador.

Ivan Enderica Ochoa will be one of the 25 male finalists and former two-time Ecuadorean Olympian Jorge Delgado will be the assistant referee.

“We are very proud of him,” says Ecuador’s greatest swimmer and FINA Technical Open Water Swimming Committee Vice Chairman Delgado of the young Ecuadorean. “He trains in Cuenca up at 2,400 meters. It’s high altitude training all the time in the city up in the Andean Mountains.” While a podium finish is considered unreasonable given the depth of the field, a top 10 finish for Ivan would be a fine showing.

Ochoa is aggressive, swims intelligently, and is not afraid to mixing it up with anyone from the co-favorites of Lurz and Spyros Gianniotis to the Tunisian gold medalist Ous Mellouli.

One thing is for sure: both Ivan and Jorge make Ecuador proud.

A contemporary of Mark Spitz and a world-class swimmer who was a finalist in the 100m and 200m butterflys in the 1972 and 1976 Olympics, Delgado has seen the sport of marathon swimming grow globally since he was traveled the world as an aquatic ambassador since the 1970s. “There are many differences [between the marathon swim at the 2008 Beijing Olympics and the 2012 London Olympics]. Now, the sport of open water swimming has so many more participants. The 10K is now a solid event with high expectations from the general public around the world.”

Delgado, one of the most highly respected marathon swimming referees in the world will serve as the head referee in the women’s event on August 9th and as the assistant referee in the men’s race on August 10th. “The women are so much harder to officiate,” admits fellow referee and 7-time world champion Shelley Taylor-Smith. “There is more physicality and you always have to be alert to everything the women do.”

And that is exactly what Delgado does with objectivity and laser-like focus.

Delgado knows that the difference between winning and losing, between medaling and not medaling, is only a matter of seconds and tenths of second – during his era in the pool and in the contemporary world in the open water. This similarity in competitiveness remains, but now the closeness and excitement of the Olympics is shared immediately with the world on television, over the Internet, via digital photos, and videos shared over online social networks. The sport has become real-time entertainment for millions of people around the world who can then immediately share their joy, disappointments and comments globally.

That is a far cry from a world of sport that Delgado experienced in the 1970s. “I moved to California and then Illinois to swim, train and learn English,” recalled the Ecuadorean hero known for his calm nature and multi-cultural sensibilities – ideal traits for an Olympic referee. “Everything is different now [compared to earlier eras]. Before [the sport of swimming] didn’t have high technology. Before, everybody trained under the same parameters and competitions were less complicated then than now. Everybody could win.”

And the country of Ecuador does win in the sport of open water swimming, especially with two outstanding representatives performing in the Serpentine during the 10K at the Olympics.

For more information on the Olympics marathon swimming 10km – both men and women – visit here.