Ederle Swim, Round 2 For Michael Miller 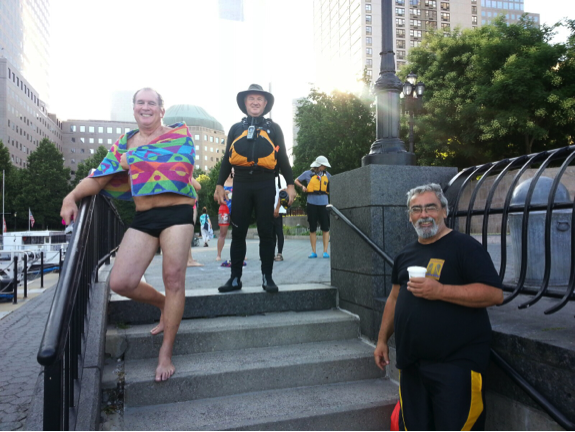 Interview courtesy of Mackenzie Miller on the 2014 Ederle Swim from New York to New Jersey.

The Ederle Swim that takes place in New York is a 17.5-mile race, attracting swimmers from around the world. Starting in Manhattan, New York, swimmers race to Sandy Hook in New Jersey dodging ferries and boats along the New York City skyline all while seeing landmarks including the Statue of Liberty and Staten Island. This year, Hawaii resident Michael Miller completed the swim for the second time. Back in 2010, he completed the swim in 5 hours 20 minutes. This year, he placed fourth out of 12 marathoners with a time of 5 hours 45 minutes.

Daily News of Open Water Swimming: Were there any significant changes in the swim this year as opposed to when you competed in 2010?

Michael Miller: One major difference was the water temperature. In 2010, the race was in October with a water temperature of 56°-58°. This year, water temp was closer to 73°F as an average. I expected a faster time, not slower. The race briefing suggested due to the “Super Moon”, the tide pull would be much stronger, which it may have been at times, but off Sandy Hook, it took a long time to go 2 miles, maybe 90 minutes. The air temperature was perfect, maybe 82°-83°F. I got sunburned.

Daily News of Open Water Swimming: Whenever you go on trips like these, where do you stay and why?

Michael Miller: I use a home/condo rental service called vrbo.com. Typically, I get a “home” for far less the price than a hotel room, including reserved free parking, free internet, and a kitchen; basically a 1-2 bedroom unit.

Daily News of Open Water Swimming: How do you work while on a swimming “vacation”?

Michael Miller: Remotely, I have access to all UBS functions, as most vrbo rentals have secure Internet access, and it’s very safe. So, when I need to work, I can work.

Daily News of Open Water Swimming: How does a swimmer from Hawaii, like you, acclimate to swimming in cold-water in preparation for these swims?

Michael Miller: This year, knowing I’d swim in 71-73°F water, no acclimation was necessary. For any other swims, on East Coast, I stay at a VRBO on Jersey Shore, where I can acclimate. On the West Coast, it usually is good old dependable Aquatic Park, San Francisco by Fishermans Wharf.

Daily News of Open Water Swimming: Were different actions taken in your nutrition to prepare for this race a second time?

Michael Miller: Nope. CarboPro with Gatorade, every 30 minutes, 8-10 ounces. Not once did I feel dehydrated or short of fuel.

Daily News of Open Water Swimming: While training for this year’s event, were there any differences in your training regimen from your last Ederle swim in 2010?

Michael Miller: Yes, I knew I needed to acclimate in 2010. But distance-wise, coming off Red River, North Dakota this year in June 2014, End-Wet (Extreme North Dakota Watersports Endurance test), I knew I wanted to hold my entire yardage prior to June 21. So I averaged 20-30 km per week between June 29th and August 2nd.

Results from the 2014 Ederle Swim (for more information, visit here):